As we discussed in our Monring Lineup, the resurgence of COVID in some global economies resulted in a number of weaker readings in Markit Service PMIs; namely those in Europe. Meanwhile, the reading for the US released this morning met expectations at 54.6, unchanged from the flash reading but slightly lower than last month’s reading of 55.0. The ISM reading for the Non-Manufacturing sector, on the other hand, had a stronger showing in September with the headline index rising to 57.8 from 56.9 in August.  That was also stronger than expected as forecasts were calling for the reading to decline to 56.2 which would have more closely resembled the Markit reading.  At 57.8, this reading indicates that the service sector of the economy continued to expand sequentially for a fourth straight month in September and at a slightly accelerated rate from August. While not quite as strong as the reading from July, the services sector continues to bounce back at the strongest pace of the past couple of years. 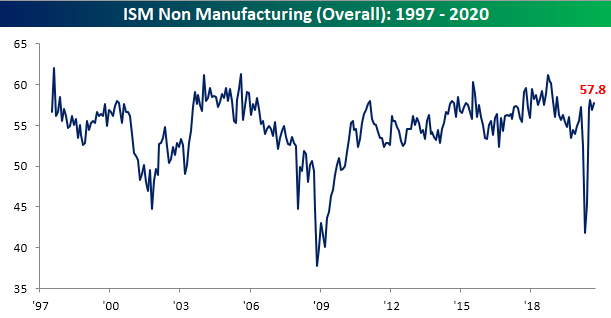 While the ISM’s reading on services was stronger than expected, last Thursday’s release of the manufacturing counterpart was more of a disappointment, although, it was still consistent with further improvements in that area of the economy.  Despite that decline, the composite of the two readings rose to 57.5 from 56.8. Just like the services index, outside of the July high that is at one of the strongest levels since 2018. 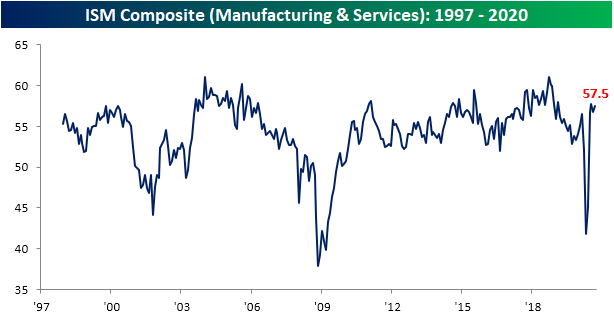 Breadth in the September report was mixed with a nearly an equal number of sub-indices rising and falling month over month.  Despite this, there were only two indices, Inventories and Import Orders, that fell into or remained in contractionary territory. So overall, the report was consistent with continued improvement in the services sector across various metrics. 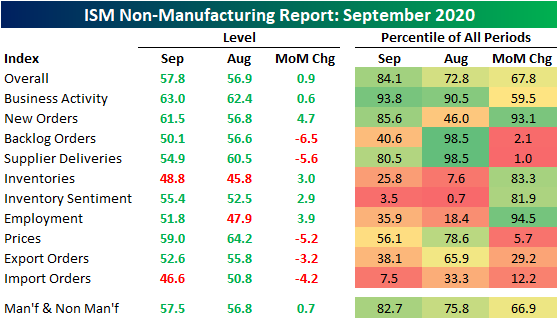 For starters, overall demand seems to have held up well in September with the indices for Business Activity and New Orders both rising and coming in the strongest levels of any of the individual indices of this month’s report.  Similar to the headline number, these indices were higher in September after a drop in August from near-record levels in July.  Currently, both are still off those highs but remain at the upper end of their historical ranges. The index for New Orders saw the largest improvements this month with a 4.7 point rise.

While businesses receive more orders and general business activity continues to ramp up (both for a fourth consecutive month), the rate of Backlog Orders has slowed.  As shown below, that index fell to a barely expansionary reading of 50.1 in September.  Outside of the 7.3 point decline in April, the 6.5 point drop this month was the largest since June of 2011.  In other words, businesses saw a significant deceleration in existing orders in the month of September. Given new orders rose, that was likely thanks to higher production rather than softening demand.

With businesses working off their order backlogs, inventories have continued to decline.  Although higher in September, the index for Inventories has now been in contractionary territory for back to back months.  Those inventory declines are also consistent with what has been observed for the manufacturing sector.

One major positive of the September report was that for the first time since February, the survey showed Employment expanded.  The index rose to 51.8 after half of a year of contractionary readings. Comments from respondents regarding employment noted that this increase in employment was bringing back furloughed workers and increased hiring to meet increased demand. Click here to view Bespoke’s premium membership options for our best research available. 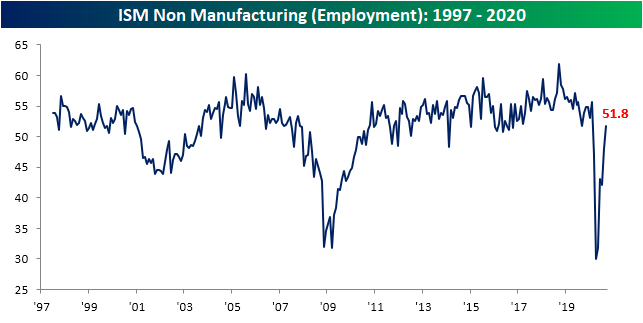