One month ago, ISM released its monthly reading on the manufacturing sector which we noted was fortunately overshadowed by the headlines surrounding the geopolitical tensions in the Middle East. That December ISM Manufacturing report fell to 47.2 which was the lowest headline level since June 2009.  One month later, the headline number has more than bounced, rising 3.7 points to 50.9.  As shown in the second chart below, that 3.7 increase is one of the largest one month increases of the past 20 years. Ironically, while last month saw the weakest reading since June 2009, the 3.7 point bounce off of those lows was the largest month-over-month jump for the headline number since May 2009. 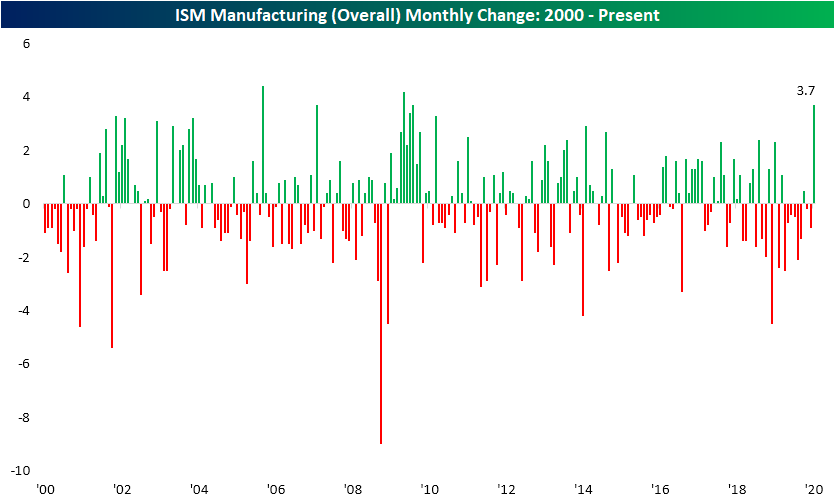 Glancing at the commentary section, the index’s uptick certainly shows itself with Computer & Electronic Products mentioning suppliers are at or above capacity, though, there are also a fair share of negative comments. The headwinds that have been prominent for over a year now have by no means dissolved as multiple comments address adverse effects of tariffs and/or weakened demand. Computer and Electronic Products as well as Food, Beverage and Tobacco products make mention of hurt margins. In other words, although the data has improved dramatically, qualitatively there is still some weakness present. 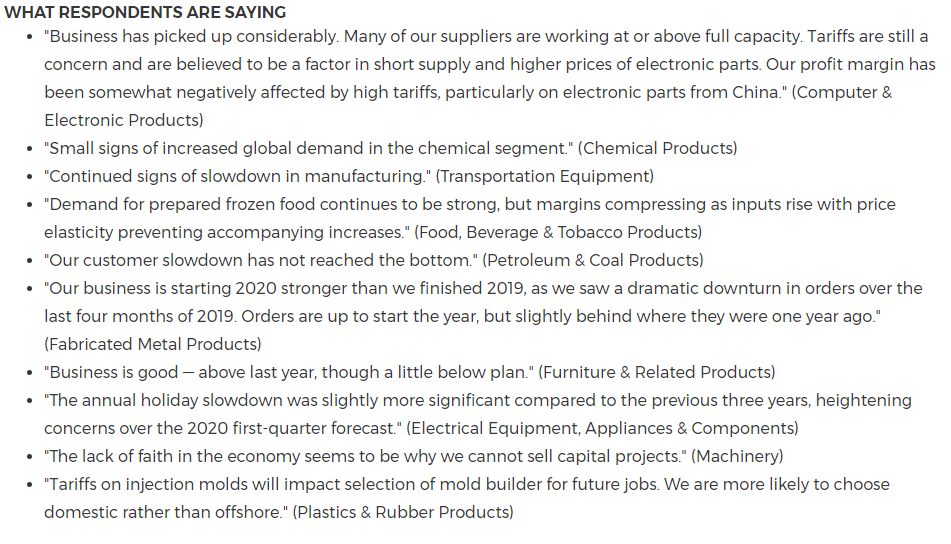 In the table below, we break down the changes over the past month and year of the individual sub-indices. Breadth was very strong in January with every sub-index rising with the exception of Supplier Deliveries. Not only did a vast majority rise month-over-month, but now seven of the eleven indices have expansionary (>50) readings compared to just two last month.  By far the biggest winner has been Production which follows it being one of the biggest decliners last month. But even with the surge it is still lower than where it stood one year ago. But that is more broadly the norm as Customer Inventories, Prices Paid, and Export Orders were the only ones to have risen since last January. 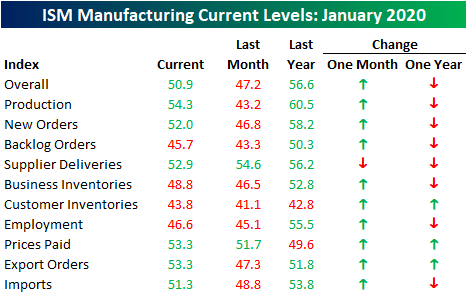 As previously mentioned, the 11.1 jump for production was a massive improvement.  Now at 54.3, it is at its highest level since March 2019. As shown in the second chart below, these types of massive moves in one month have been pretty rare.  Over the past two decades, there has only been one other time, May 2009, that this sub-index has risen by more than 10 points in a single month.  Expanding the horizon and looking back to 1948 when data begins, there have been a total of just 11 (including this most recent occurrence) months in which the Production sub-index has risen by 10 points or more.

New orders was another sub-index that experienced a notable improvement rising 5.2 points to 52.0.  Although the month-over-month rise was not nearly as large as that of production, for the New Orders index it was the largest one month increase since January of last year and it is now at its highest level since May of last year.

Employment for the manufacturing sector has been notably weak with last month’s reading the lowest since January of 2016. Although it improved to 46.6 from 45.1, the improvement was much more modest when compared to the headline number.

Given the recency of the issue, the full effects are unlikely to show in the January data, but the coronavirus has not yet put a damper on trade activity.  Both export and import orders have been on the rise over the past few months and January was no exception as both sit at their strongest levels around a year or more.  Start a two-week free trial to Bespoke Institutional to access our interactive economic indicators monitor and much more.