ISM Collapse All Around

While the results for ISM’s Non-Manufacturing index for the month of April were better than expected (the index was forecasted to come in at 38), the index fell 10.7 points from March down to 41.8.  That is the fifth lowest level of the index since its inception in 1997 and the weakest reading since March of 2009.  April also marked the first time that the headline number showed a contractionary reading (those below 50) since December of 2009. 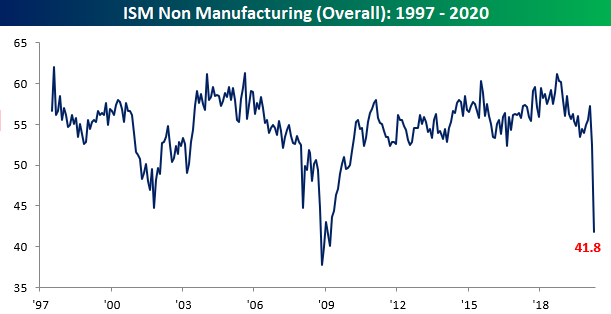 As shown in the table below, not only was the headline number at one of its lowest levels ever, but the 10.7 point decline was the largest month over month decline ever recorded.  The same can also be said for the month over month declines for multiple sub-indices including those for Business Activity, New Orders, Employment, and the Manufacturing and Non-Manufacturing composite.  On the other hand, the indices for Supplier Deliveries and Inventory Sentiment experienced their largest one month gains ever, but those are not necessarily positives as detailed later on.  Breadth across each of the sub-indices was overall very weak in April as several readings are now at or near some of their weakest levels on record with most now sitting in contractionary territory. 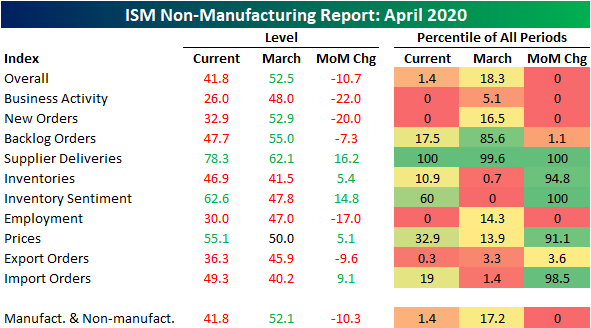 One of the weakest areas of last month’s report was Business Activity.  The index only registered a reading of 26 in April compared to 48 in March.  That 22 point decline is nearly double the previous largest MoM decline of 11.8 points from December of 2007 to January of 2008. This index is now sitting at its lowest level ever, surpassing the previous low of 34.4 from November of 2008.

The same can also be said for New Orders.  Demand in the services sector has been crushed by the COVID pandemic and the New Orders index fell to 32.9. That is also a record low, and the 20 point drop was the largest on record which follows last month’s 10.2 point decline which is now the third biggest MoM drop. Only 2 industries surveyed, Public Administration and Finance & Insurance, reported growth in New Orders with another 16 reporting contraction indicating the weakened demand is occurring throughout the service sector.

In addition to weak demand, the supply side has also taken a hit. Supply chains appear to have become severely disrupted from the pandemic.  The index for Supplier Deliveries is the only one that is inverse (readings above 50 indicate slower deliveries rather than faster) in the ISM report. In other words, the index rises when it takes longer for suppliers to make deliveries which as ISM details “is typical as the economy improves and customer demand increases”. But in the current scenario, the index has surged by the most of any month in its history to a record high of 78.3 on a function of supply weakness rather than demand strength (as indicative in New Orders’ collapse).  Supply chains have faced serious headwinds as all 18 industries reported slowed deliveries in April. This record high in Supplier Deliveries, which again in more normal circumstances could be taken as a positive sign for the economy, helped to bolster the weak headline number.

With weak demand and long lead times, industries are reporting inventories as too high. The index for Inventory Sentiment saw a massive surge rising 14.8 points to 62.6. While that is only the highest level since July 2017, this furthers the point that supply chains are facing trouble and demand remains weak. That large increase in the number of industries reporting inventories as too high comes as inventories are appearing to be drawn down as that index is still at a contractionary reading of 46.9.

Employment has also collapsed with a second consecutive reading below 50. All 18 industries reported that there was a decline in employment which sent the index to a record low of 30. As with the other categories mentioned, this was also the largest monthly decline ever. In the commentary section, one responder made an interesting note stating business has been impaired “due to employees afraid to work side-by-side with other employees.”

After today’s release and last Friday’s release of the manufacturing counterpart, the composite index is now at its weakest level (41.8) since March of 2009 (39.8) with the 10.3 point decline from last month the largest one month decline ever recorded for the composite.  All in all, the two reports for the month of April gave a very bleak outlook for the US economy.  Start a two-week free trial to Bespoke Institutional to access our interactive economic indicators monitor and much more. 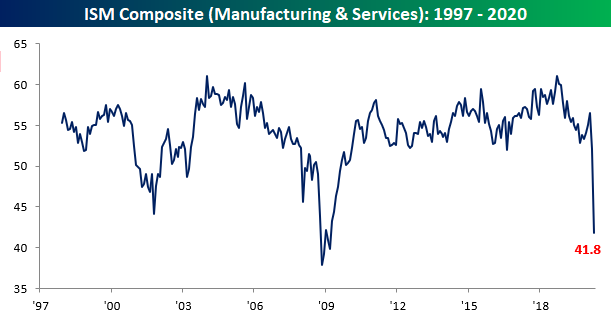