Talk about a disappointing start to the quarter.  In the first economic report of the new quarter, ISM Manufacturing came in weaker than expected falling from 49.1 down to 47.8 compared to expectations for a reading of 50.0.  While a miss of fewer than 1.5 points versus consensus expectations isn’t huge, investors treated it that way as the Dow has reversed more than 400 points from its earlier highs. What really spooked investors was the fact that the headline reading dropped to its lowest level since June 2009.

Breadth in this month’s report was also poor as six categories showed m/m declines while just four showed increases.  On a year/year basis, things were even worse as Customer Inventories were the only category up versus this time last year.  Some of the more notable decliners were Production (first chart below), which fell to its lowest level since April 2009, and Export Orders which is at its lowest level since March 2009. 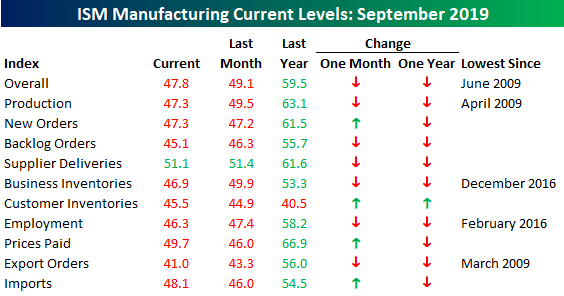 In the case of Export and Import Orders, this month we saw a really wide disparity between the two.  While Export Orders fell to its lowest level since March 2009, Imports actually increased. Normally these two indices move in unison with each other, but this month saw a wide divergence suggesting that the US economy is still on a better footing than international economies. In fact, the current spread between Exports and Imports hasn’t been this negative since September 2007.  Start a two-week free trial to Bespoke Institutional for full access to our research and market analysis.