For an equity market that has hit all-time highs on multiple occasions during this year, one would think that investors would be salivating over IPOs for a chance to ‘get in from the beginning’ and bidding them higher in the process.  The reality, though, is that IPOs have been one of the more challenging areas of the market to make money.  The first chart below shows the median performance of US-domiciled IPOs (not including special purpose vehicles) from their IPO price so far in 2019 based on the size of their offerings.  For each offering range, the number inside of the bar indicates how many IPOs were in that offering range in terms of size.  Investors have had an extremely difficult time stomaching big IPOs throughout 2019.  Of the eight IPO offerings of $1 billion or more, the median return from the IPO offering price has been a decline of 6.6%. IPOs in this size range include SmileDirect Club (-51%), Lyft (-46%), and Uber (-35%).  Not all of these big names have been big losers, though, as both Tradeweb and Pinterest are up over 30% from their IPO price.

While really big offerings have hit the market with a thud this year, more manageable offerings in the range of $100 million up to $1 billion are generally still trading above their offering prices.  It isn’t until you get down to the very small, often lower-quality offerings where returns are negative again.  As shown, of the 44 IPOs of less than $100 million, the median decline from the offering price has been a decline of 6.2%. 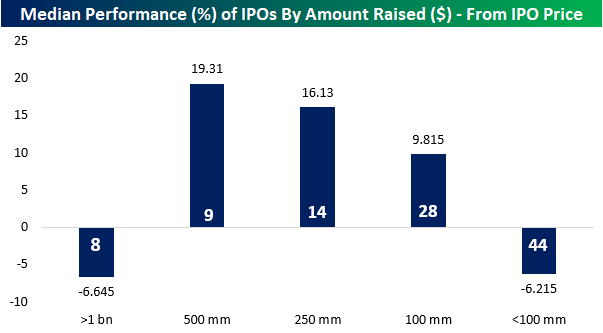 While performance hasn’t been horrible for investors who got in at the IPO price, for those investors who had to wait until the IPO started trading to get in, performance has been atrocious.  By this measure, every size offering range is down by a median of at least 10% with offerings of greater than $1 billion down by over 19% and offerings between $500 million and $1 billion down just 10%. 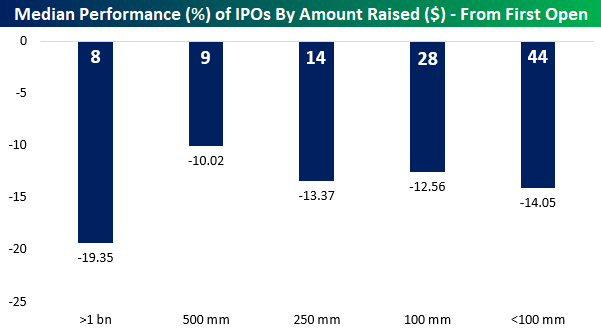 Turning to individual issues, the tables below show the best and worst-performing IPOs relative to their IPO prices.  On the downside, the ten worst performing IPOs are all down over 50% from their offering price.  Thankfully, most of these IPOs were small non-household Health Care names that most investors probably didn’t get sucked into, but for those that did, it has been a rough road.

It hasn’t been all bad news for IPOs this year, though, as there have been some winners.  The table below lists the ten best performing IPOs from their offering prices.  Topping the list is fake meat company Beyond Meat (BTND) which has seen a gain of 471% from its IPO price in May.  Other names that may be familiar to readers are Zoom Video (+104%) and Crowdstrike (+92%).  While these IPOs have done very well, we would note that performance hasn’t been nearly as strong for investors who couldn’t get in at the IPO price.  While the average gain of these ten names from the IPO price has been 136%, based on the performance where each stock first opened for trading, the average gain is half that at 68%. Start a two-week free trial to Bespoke Institutional to access all of our research and interactive tools.