The Renaissance IPO ETF (IPO) tracks several of the past couple of years’ major initial public offerings.  The current class of IPOs that find themselves as a holding of the ETF include many COVID economy stocks that have gone on huge runs like Zoom Video (ZM), Moderna (MRNA), and Slack (WRK) as well as high flying electric vehicle names like NIO (NIO). As shown in the second chart below, that resulted in massive outperformance relative to the S&P 500 (SPY). But more recently, that has lost its footing.  On July 13th, IPO saw a sizeable gap up but sold off sharply intraday for an outside day reversal lower.  In the days since then, it has put in a lower high and lower low. Additionally, it has broken its uptrend line off of its March lows in the past few days. While that broken uptrend is a negative with regards to the technicals, some mean reversion should be welcome. On Friday, IPO came within 2.2% of its 50-DMA which is the closest it had come since April 22nd. Across all days since it first crossed its 50-DMA back in April, IPO has traded on average 14.3% above its 50-DMA.  Click here to view Bespoke’s premium membership options for our best research available. 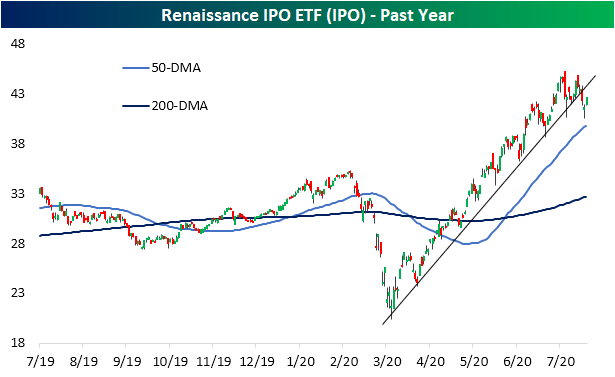 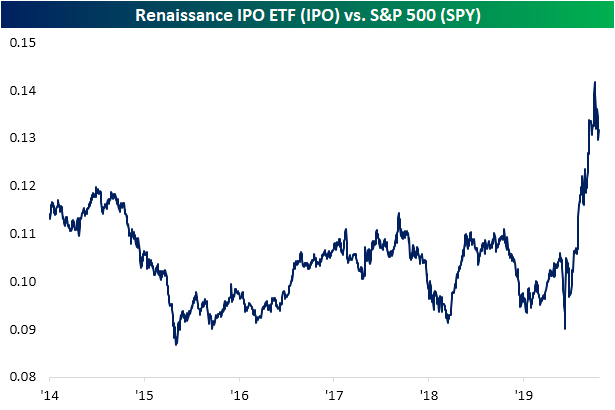