Although the survey would not have caught any sentiment changes as a result of equities’ rally today, the weekly investor sentiment survey from AAII rose this week to 37.63% after dropping to 31.72% last week.  That only brings it back up towards the levels from one month ago when bullish sentiment peaked just above 40%. While getting closer, this week was also the fourth in a row in which bullish sentiment was below its historical average of 38.07%. 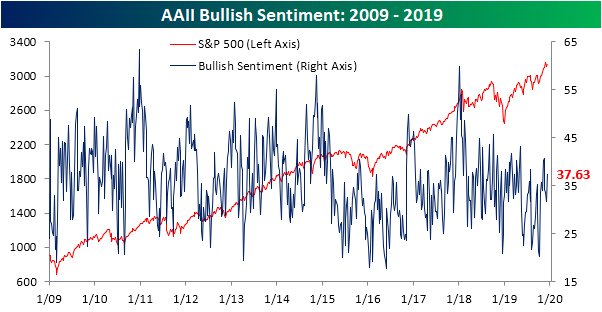 The bulls’ gains were the bears’ loss as the percentage of investors reporting as pessimistic fell by over three percentage points.  Like bullish sentiment, bearish sentiment is also still below its historical average of 30.36% but by a wider margin.  Granted, this is not extended to any extreme degree as it is still well within one standard deviation of that average.  In other words, both bearish and bullish sentiment has shifted more positive but not by a significant amount. 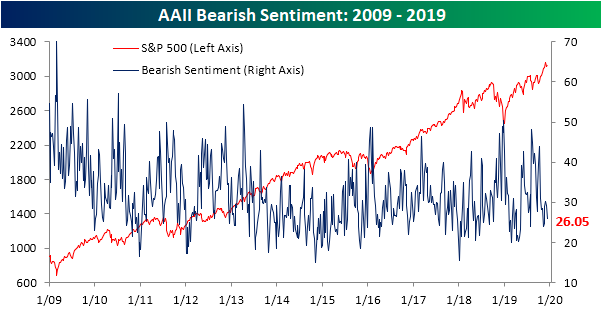 Given the bull-bear spread is at its widest in a month, neutral sentiment has also pulled back in the past week falling to 36.32%. This comes after last week saw one of the higher readings for neutral sentiment this year. With bullish sentiment borrowing from the neutral camp, there is a higher percentage of investors reporting as bullish than either neutral or bearish for the third time in a month. Start a two-week free trial to Bespoke Institutional to access our interactive economic indicators monitor and much more. 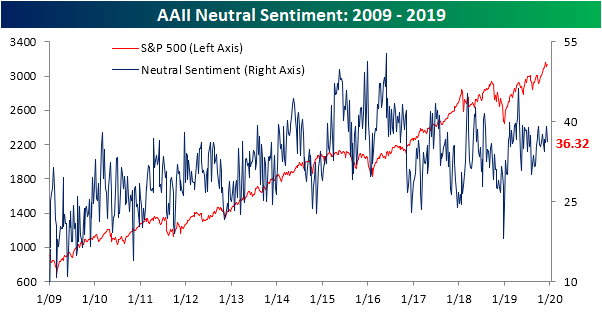