In a post earlier today, we noted that individual investors still remain overwhelmingly bearish despite the equity market’s rally off the March lows.  Another sentiment indicator released by TD Ameritrade supports this view that investors aren’t particularly bullish right now.  The TD Ameritrade Investor Movement Index is a proprietary, behavior-based index created by TD Ameritrade designed to indicate the sentiment of individual investors’ portfolios. It measures what investors are actually doing, and how they are actually positioned in the markets.

The TD Ameritrade Investor Movement Index has been in existence since 2010, and in that entire history there have only been five months where the index was weaker than it is now, and that was from October 2011 through February 2012.  That was also a period that marked a major low in the equity market and was followed by a nearly uninterrupted three-year rally in the S&P 500.

While the Investor Movement Index is near record lows right now, it has been weak for some time, and that weakness came even as the S&P 500 was climbing to record highs over the last 12-18 months.  In other words, while investors are just about as cautious as they have been at any time in the last ten years, this conservatism is nothing new.  Start a two-week free trial to Bespoke Institutional for full access to our analysis and interactive tools. 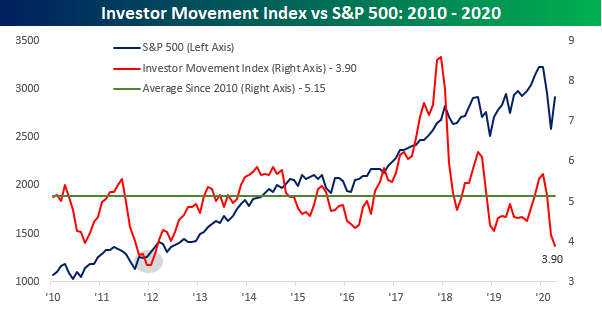