Despite continued volatility for equity markets over the past week, bullish sentiment has picked back up this week, rising to 38.74% from 30.43%.  Last week’s reading marked the lowest level for AAII’s reading on bullish sentiment since October, but this week’s 8.31 percentage point jump brings it right back into the middle of the past few years’ range and within one percentage point of the historical average of 38.08%. 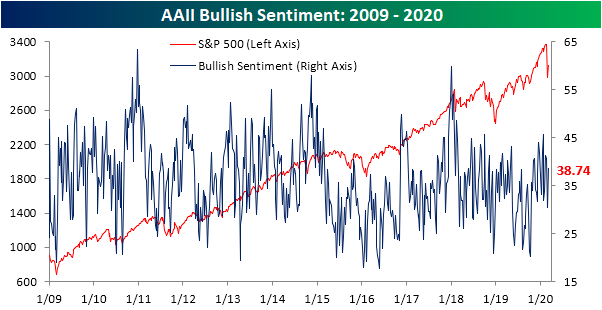 While bullish sentiment is not at any sort of high or low, bearish sentiment has risen to a nearly equal reading of 39.64% which is the highest level since October when it was several percentage points higher in the mid-40s.  This leaves bearish sentiment fairly elevated with regards to its historical average of 30.35% but not quite to any extreme degree (over one standard deviation above that average). 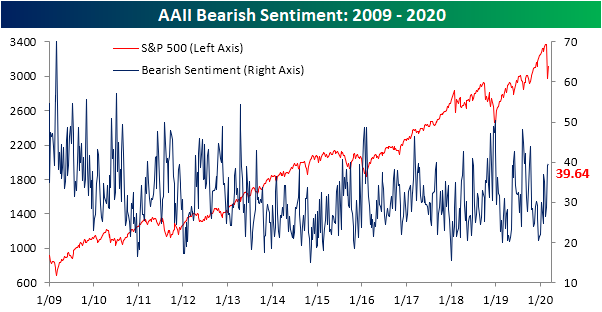 The same cannot necessarily be said for neutral sentiment which has now fallen over one standard deviation below its historical average. Neutral sentiment cratered 8.81 percentage points this week down to 21.62%.  That is the lowest level, the biggest one week decline, and the first time it has fallen one standard deviation below its historical average since late December of 2018.  If the choppy price action over the past week wasn’t enough confirmation, this sentiment data points to investors being increasingly polarized along the bullish and bearish lines. 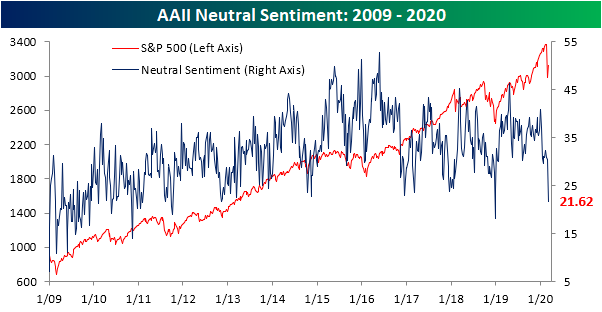 Looking at past times that sentiment became similarly polarized, the bulls have tended to be on the right side of history. The table below shows past times since the beginning of the AAII survey that neutral sentiment was one standard deviation or more below its historical average while bullish and bearish sentiment were within normal ranges.  As depicted, this is the first time that this has occurred since November of 2012 when each sentiment reading was within just a few tenths of a percentage point of current levels.  Again, the performance of the S&P 500 following these sentiment readings has had a positive bias. Other than one week later which sees performance more inline with other periods, the S&P 500 has typically outperformed and has consistently traded higher. Start a two-week free trial to Bespoke Institutional to access our interactive economic indicators monitor and much more. 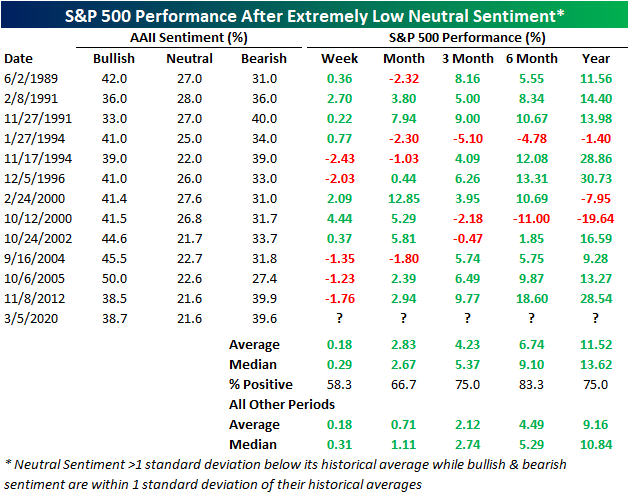