Seeing stocks drop more than 50% from record highs not once but twice in the span of ten years is enough to bludgeon the psyche of even the best investors.  Even more than a decade after the lows of the credit crisis and the S&P 500 trading at double the level it traded at when it peaked in 2007, investors still look at equities with suspicion.  The latest example that illustrates this is the TD Ameritrade Investor Movement Index (IMX).  According to TD Ameritrade, the IMX index is meant to provide a snapshot of sentiment on the part of retail investors by tracking the behavior and trading activity of the firm’s clients.

With the market at record highs, one would have expected sentiment on the part of retail investors to be pretty positive resulting in an elevated reading in the IMX index.  The reality is – you guessed it – the opposite.  The chart below compares the IMX index to the S&P 500 going back to 2010.  From 2010 through 2016, the IMX index oscillated in a range of roughly four to six even as the S&P 500 made new all-time highs.  It wasn’t until 2017 when the broader market traded higher all year with nothing more than a 3% pullback that the IMX index really started to break out of its range.  After the GOP tax plan passed through Congress and was signed into law, the IMX index surged above eight to record highs.  Investors were finally starting to embrace the market again, as individuals who had sworn off equities forever finally started to want back into the stock market.  Some even dipped their toes into bitcoin and other crypto-currencies!

The fun didn’t last long, though.  In late January 2018, the S&P 500 had its first 10% correction in more than a year, and investors weren’t willing to wait it out.  They quickly headed for the exits and have once again mostly stayed on the sideline.  This past November, even though the S&P 500 was at record highs, the IMX index was at a reading of just 5.17, which is just barely above its historical average of 5.16.  Not exactly a level you would consider indicative of confidence.  Sign up using our 2020 Annual Outlook Special to gain access to our full report between now and year-end which covers the market from just about every angle imaginable! 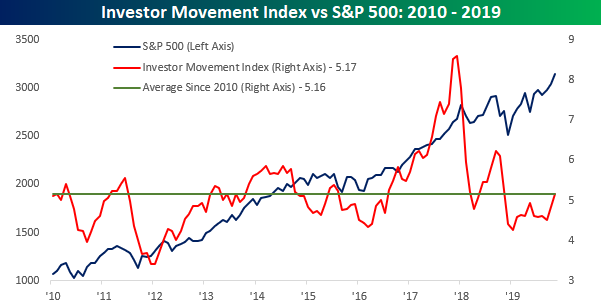