One of the more remarkable stats you’ll ever see is the breakdown of long-term performance between after-hours and intraday trading.  Using the S&P 500 tracking ETF (SPY) that began trading in 1993, we can see how much of the S&P’s gains over the years have come outside of regular trading hours versus during regular trading hours.  As any investor that follows the market closely knows, the S&P doesn’t open the next day at the same level that it closed the prior day.  That’s because the futures market that trades outside of the regular 9:30 AM ET to 4 PM ET drives index levels.  Positive news that occurs any time after the 4 PM close or before the 9:30 AM open gets priced into S&P futures as do ETF prices that trade after hours.  When SPY officially opens for trading at 9:30 AM ET, it will “gap higher” to levels it was trading at in the pre-market.  If bad news has S&P futures trading lower after hours, SPY will “gap down” and open lower at 9:30 AM.

Now that we’ve explained the difference between After Hours and Regular Trading, let’s take a look at how the two strategies have performed since SPY began trading back in 1993.  To calculate the two performance numbers, we run two strategies — one that buys SPY at the close every day and then sells it at the next day’s open (After Hours), and another that buys SPY at the open every day and then sells it at that day’s close (Regular Trading).  Had you only invested in the After Hours strategy by buying the close and selling the next open, you’d be sitting on a solid gain of 722%.  Had you done the opposite, however, and only invested in the Regular Trading strategy by buying at the open and selling at the close, you’d actually be down 8.5%.  That’s right — if you only owned the US stock market during regular trading hours going back to 1993, you’d be sitting on a decline right now in September 2020.  This stat shows that more than 100% of the S&P’s gains since 1993 have actually come outside of regular trading hours.  For anyone trying to make a living doing intraday trading, it’s certainly a tough game! 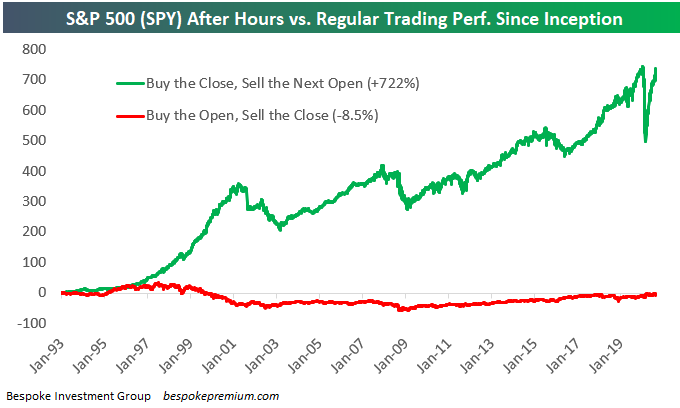 The reason we’re bringing up the After Hours versus Regular Trading strategies now is because we’ve seen some big moves in the two so far this year.

When COVID first hit, the After Hours strategy — which has historically been the winner — plummeted as futures markets seemingly tanked every day resulting in SPY “gapping down” sharply each morning.  At the same time, the Regular Trading strategy was holding up remarkably well.  Once the initial negative reaction occurred at the open back in February and March, investors stepped in to buy the market throughout the trading day.  As shown below, at one point in late March when the S&P was down more than 30% year-to-date, had you only owned during Regular Trading hours, you would have actually been up on the year.

The two strategies have been converging lately, however.  Since late August, the After Hours strategy has actually been performing well, meaning SPY has been gapping up in the morning most of the time.  But during regular trading hours, investors have been selling.  This new trend of gaps up at the open followed by intraday selling began on August 27th.  Since then, had you bought SPY at the close every day and sold at the next open, you’d be up 2.3%.  Had you done the opposite and bought at the open every morning and sold at that day’s close, you’d be down 7.1%.

Generally speaking, we don’t like to see gaps higher at the open that are sold off intraday, but that’s what has been happening during the month of September.  We know that September has historically been the worst month of the year, and it’s a month that is usually volatile as well.  Given the recent action, it’s not the most positive backdrop for the weeks ahead.  Click here to start a free trial to Bespoke to unlock full access to all of our research and interactive tools. 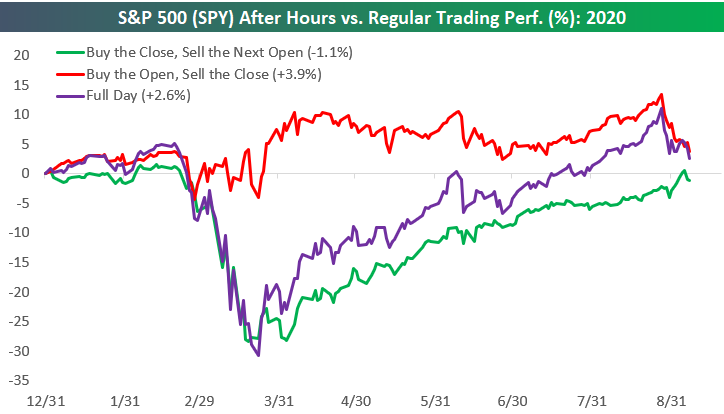 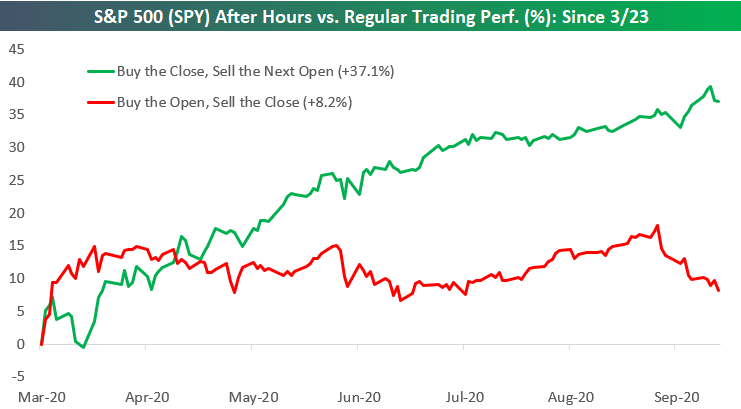