Intraday Performance on the Last Day of the Half

Today marks the last day of what was a strong quarter and first half for the S&P 500. The index is on pace to notch a 14.33% gain in the first half of 2021 which, behind the 17.35% rally in 2019, marks the second-best first half of a year since 1998.  So does a strong first half mean that investors will take some money off the table on this final day? In the charts below, we show the average percentage change from the prior close for the S&P 500 on the final day of the quarter/half going back to 1983.  Generally, across the last day of a quarter or a half (last day of Q2 or Q4), the S&P 500 tends to move higher for most of the session, but the final hour of trading typically sees that move get erased bringing the index down to the flatline on the day. Taking a more specific look at the last day of Q2 or the first half, the S&P 500 is usually pretty flat in the morning before taking a leg higher in the mid-afternoon. Granted, as with other quarter ends, the index tends to reverse lower at the end of the day although it finishes more solidly in the green.

With such a big move higher so far this year, we also wanted to take a look at just the years in which the S&P 500 was up double digits through the first half of the year.  As shown in the second chart below, the standard performance in those years is a bit different with a decline in the morning but a rebound in the early afternoon. We would note though, the occurrence from 1999 weighs heavy on the average.  On that day, the Federal Reserve hiked rates a quarter-point but took a dovish stance with respect to rate increases on the horizon.  That led the S&P 500 to go from a nearly 1% decline at the day’s lows to an over 1.5% gain by the end of the day.  As such, excluding that one occurrence in 1999 shows an intraday pattern that is more similar to the norm for all quarter ends with a drift lower in the final couple hours of trading.  Click here to view Bespoke’s premium membership options for our best research available. 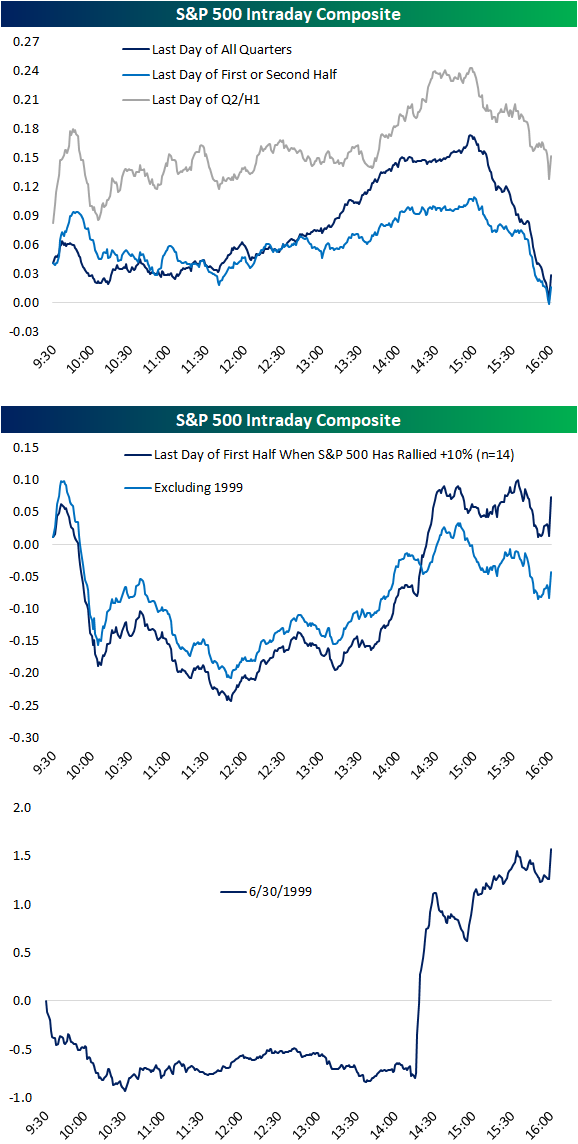