During the market turmoil in February and March, the US dollar dropped 4.81% from its high on February 20th to its low on March 9th. That was followed up with a massive run up of 8.26% over the next ten days as the dollar index rose to its highest levels since the final days of 2016/first days of 2017.  Since peaking on March 19th, however, the dollar has faced constant selling as it now sits at the lower end of the past couple of year’s range.  A weaker dollar, all else equal, would make the price point of US products more attractive to foreign buyers and as a result, should theoretically bode well for companies that base a larger share of their revenues from outside the US.

In the chart below, we show the average performance of Russell 1000 stocks since the dollar’s high on March 19th based on deciles of international revenue exposure using data from our International Revenue Database. The 1st decile represents the stocks that have the highest share of total revenues derived from abroad while the 10th decile includes all stocks who’s revenues entirely come from within US borders.  As shown, those with the most international exposure—which includes many semiconductors and some travel-related and Consumer Staples names— have generally outperformed most other deciles in that time. Granted, this was not the strongest decile. The 8th and 9th deciles were the strongest performers since March. These deciles are generally stocks with less than a fifth of revenues coming from abroad, and they actually saw even stronger returns on average since March 19th.  Meanwhile, those with no international exposure are only up 34.5% on average since March 19th.  Click here to view Bespoke’s premium membership options for our best research available. 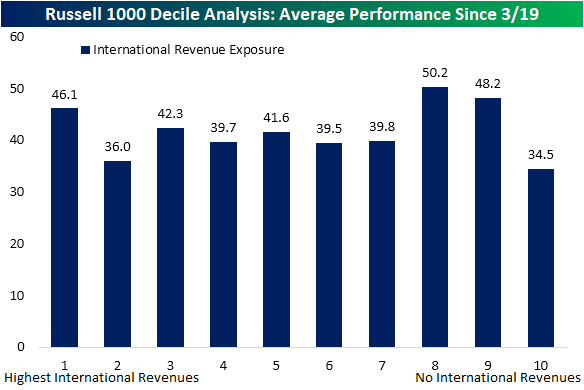