Intel Powers to SOX to a New High

Driven by a solid earnings report from Intel (INTC) after the close yesterday, the Philadelphia Semiconductor Index (SOX) is trading at another marginal new all-time high today.  After a poor earnings report from Texas Instruments (TXN) on Tuesday, it seemed as though the rally in the semis would be put on hold, but that break didn’t last long.  Looking at the chart, it’s pretty amazing how the index has made multiple new highs over the last six months but still remains less than 1.7% from where it was back in April.  Talk about coiling! 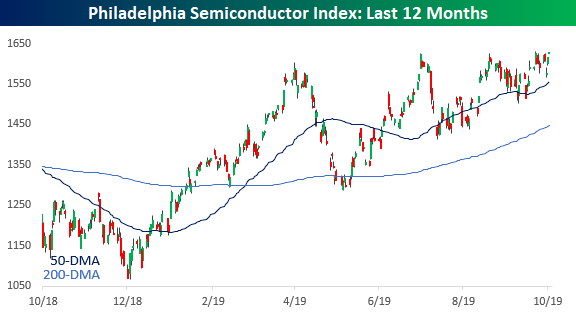 As mentioned, the strength in the SOX today is being driven by a big gain in INTC which is trading up over 6% in reaction to earnings, which would be the stock’s best one-day reaction to earnings since January 2018. With today’s move, INTC is finally starting to fill the gap from its disastrous earnings report back in April when the stock dove 9%. 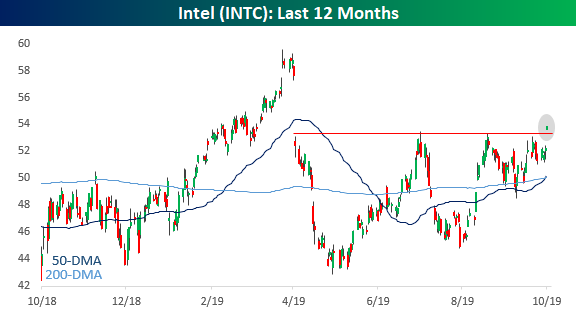 INTC’s rally today is also resulting in a golden cross where the stock’s 50-day moving average is crossing above the 200-day moving average as both are rising. Since 1990, INTC has only had 15 prior golden crosses with the most recent being more than two years ago in September 2017.  In the table below, we summarize how the stock has historically performed following each of its prior golden crosses.  Looking at the results, short term performance usually fell victim to profit-taking, but over the longer-term, the stock recovered and rallied.  While the average one-week return was a decline of 0.37% (median: -0.69%) with gains less than half of the time, six and twelve months later the stock had double-digit returns with gains nearly three-quarters of the time.  More recently, INTC has also had positive returns six and twelve months after each of its last four golden crosses. Start a two-week free trial to Bespoke Premium to unlock access to our research, including our Morning Lineup, Chart of the Day, and weekly Bespoke Report. 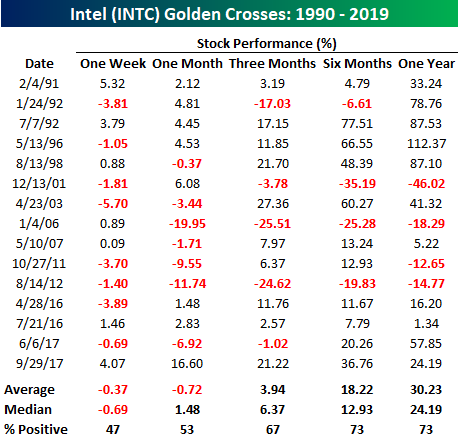