In addition to the various indices regarding small business conditions, the NFIB also surveys firms on what they see as their most pressing issue.  In August, by far the most common issue among respondents was labor-related. A record 28% reported quality of labor as the biggest issue; up 2 percentage points versus July. Another 8% reported cost of labor as their biggest issue which was slightly lower than July.  On a combined basis, the 36% reporting either cost or quality of labor as their biggest issue was the joint highest reading on record; tying August and November 2019. 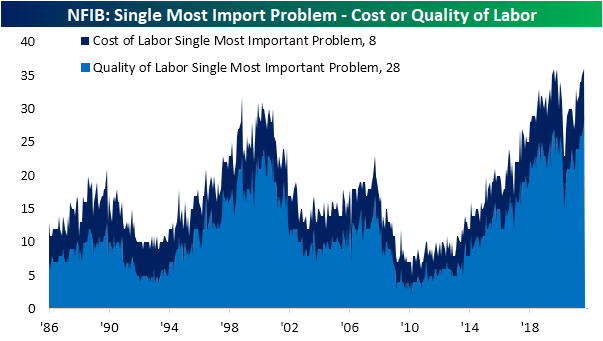 Especially over the past several election cycles, the results of the NFIB survey have tended to be impacted by politics.  For example, over the past few presidencies, when a Republican is in office there has been a lower percentage of respondents reporting either taxes or government red tap as their biggest issue and vice versa when a Democrat is in office.  That combined reading has now completely reversed the uptick following the election of President Biden as labor concerns have increasingly come into focus. 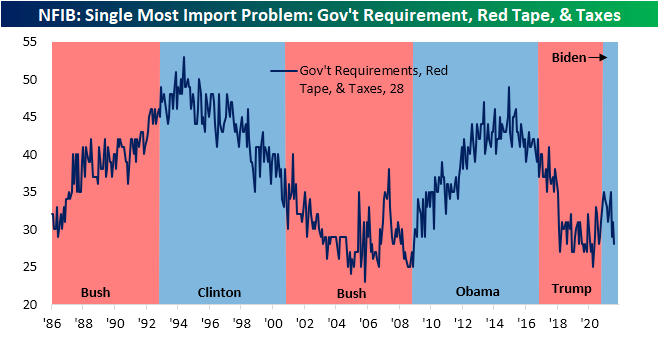 While government-related problems are still the second biggest concern(s) on a combined basis, there have been some other notable moves this month. The percentage of respondents reporting inflation as their biggest issue rose back up to the pandemic high of 13% this month.  The Great Recession was the only other period that has seen as elevated a share of respondents seeing price increases as their biggest issue. Additionally, that excludes those reporting cost of labor as an issue. 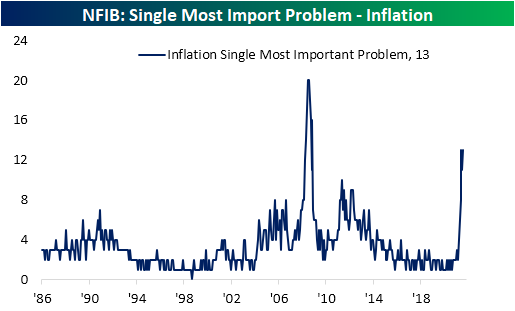 As for what the rise in Inflation as a problem may have borrowed from, one of the most notable has been competition from big business. The reading has seen a gradual decline since the end of 2019, and now at only 5%, it is tied with several months between September 2009 and September 2013 for the lowest reading on record.   Click here to view Bespoke’s premium membership options. 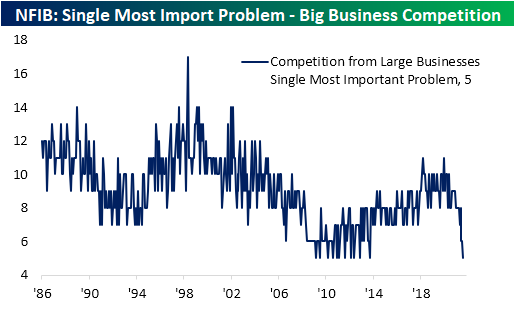