It was just the start of last month that initial jobless claims fell below a half million for the first time since the start of the pandemic and a month before that marked the first reading below 600K.  Another month in the books and it was another 100K milestone reached this week. For the first time since the pandemic began, seasonally-adjusted claims fell below 400K to 385K this week.  That is now only 129K above the pre-pandemic level from last March; the last week before claims exploded above a million. 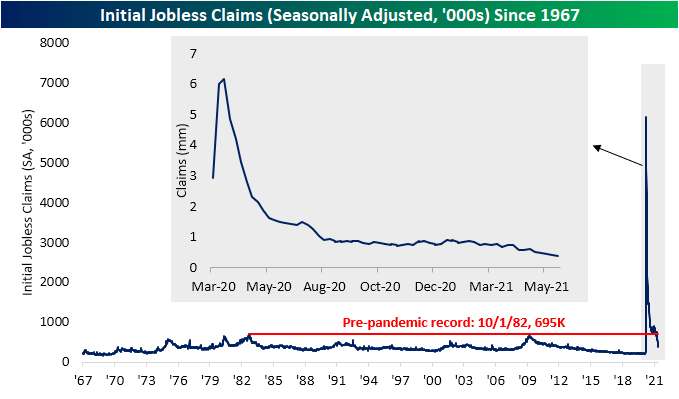 While the drop below 400K may sound like a positive, it was entirely due to the seasonal adjustment as the actual level of claims rose to 425.5K from 419.4K.  That is still at the bottom of the pandemic range albeit slightly off the lows. Additionally, while small,  that week over week uptick is a bit unusual from a historical perspective as the current week of the year (22nd) has only seen a sequential uptick 18.5% of the time since the start of the data in 1967.

In spite of the uptick in regular state programs, claims through the Pandemic Unemployment Assistance program continued to pick up the slack. The program saw another impressive drop with the program only totaling 76.1K claims.  That is down roughly 17.5K from last week and sets more pandemic lows. On a combined basis, initial claims between the two programs now sit just above 500K. 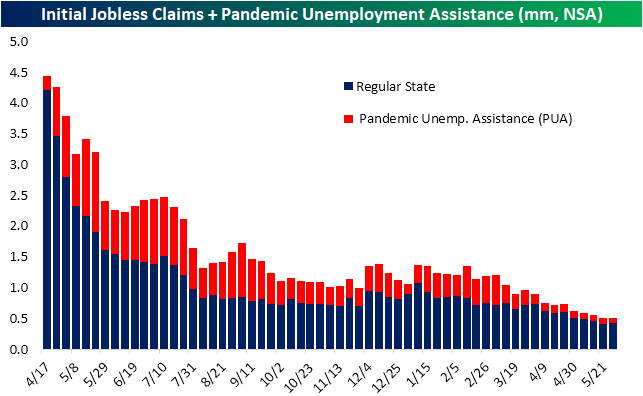 As we have frequently mentioned recently, while initial jobless claims keep coming in with impressive readings, continuing claims remain uninspiring. For the week ending May 21st, claims had risen by 169K to 3.77 million.  That brings continuing claims to the highest level since the week of March 12 and the 169K WoW increase was the largest since the last week of November when they rose 254K.  Overall, the picture at the headline level remains the same in which initial claims are strong and improving while continuing claims have hit a bump in the road. 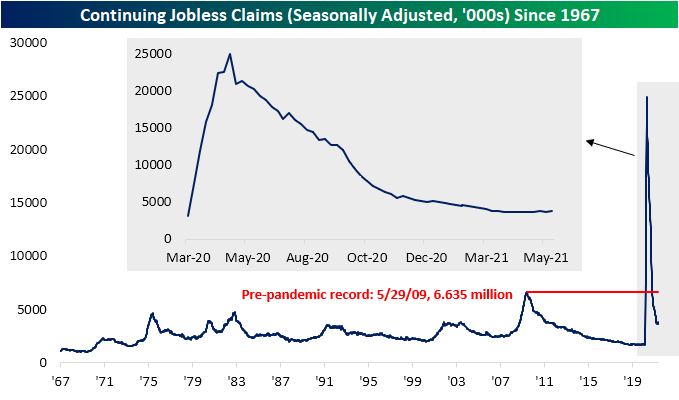 Whereas the non-seasonally adjusted picture was less positive for initial claims, there is yet another divergence compared to continuing claims.  The NSA continuing claims reading that includes all programs is delayed two additional weeks to the most recent initial claims data. That means the most recent reading in the charts below is for the week of May 14th. That week saw another decline down to new lows of 15.46 million on a combined basis with the biggest contributors to that decline being regular state, PUA, and Extended Benefits programs.  On the other hand, Pandemic Emergency Unemployment Assistance (PEUC) claims held things back as the program saw a 102K increase; bringing it to the highest level since mid-April. That meant PEUC claims’ share of total continuing claims reached the highest level yet at 34.2%. That means although regular state continuing claims have been deteriorating, the broader picture continues to improve.    Click here to view Bespoke’s premium membership options for our best research available. 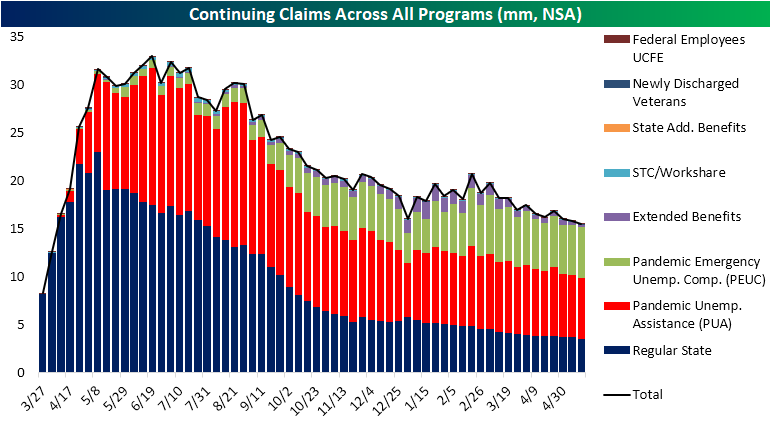 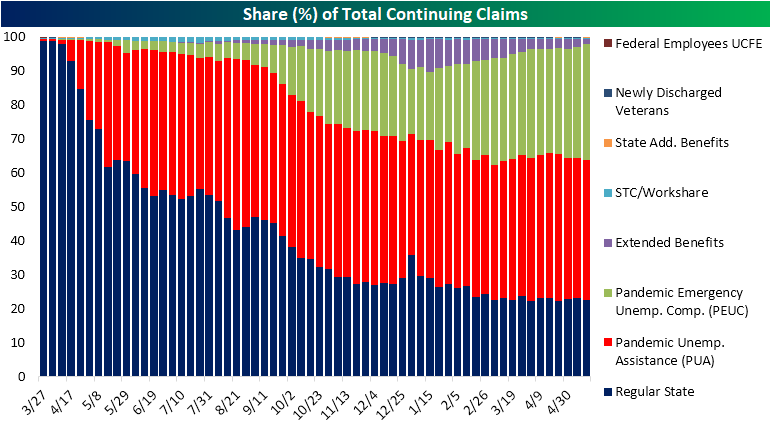