Initial Jobless Claims Back Down

After last week’s reading was revised higher, this week’s reading on jobless claims saw a decline from 218K down to 212K compared to forecasts of 215K.  With this reading, jobless claims remain at healthy levels and are well within the range of the past several months. Claims have now spent 241 consecutive weeks at or below 300K and 106 weeks at or below 250K.  Both are record streaks.

Turning to the four-week moving average which helps to smooth out some of the week to week fluctuations, a higher print of 215K from September has rolled off of the average to be replaced by this week’s 212K.  That has brought the moving average down by 0.75K week over week. While that is a small improvement near term, the overall longer-term trend for claims has yet to see any significant and consistent improvements over the past year. That being said, there has not been any deterioration either as claims have held at strong levels relative to history. 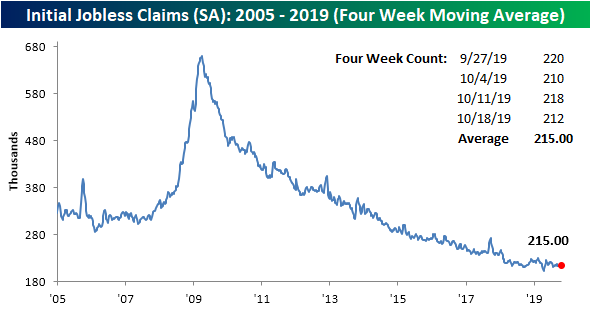 Ironically, the four-week moving average was also down 0.75K year over year with this week marking the first YoY decline in eight weeks.  Just to illustrate how strong the downtrend in claims has been over the last decade, that eight-week streak was actually the longest streak of consecutive weeks where the four-week moving average was either unchanged or increasing in the last ten years. 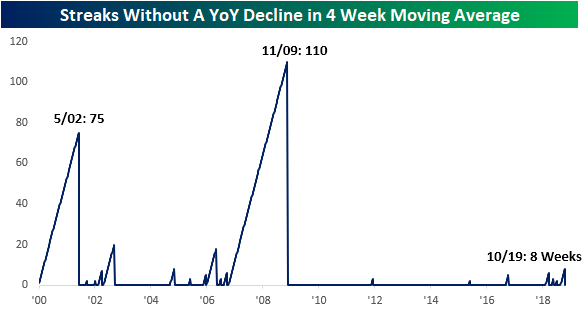 On a non-seasonally adjusted (NSA) basis, claims fell to 186.3K this week from 201.7K last week.  This was also a 12.4K decrease from the same week one year ago. Additionally, NSA claims continue to sit well below the average of 300.96K for the current week of the year since 2000. Start a two-week free trial to Bespoke Institutional to access our interactive economic indicators monitor and much more. 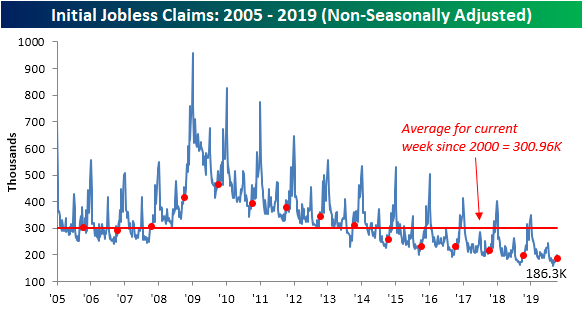