Small business sentiment picked up slightly in November with the NFIB’s monthly reading rising 0.2 points as expected.  As for what businesses reported to be their biggest problems, as we noted in today’s Morning Lineup, labor concerns remain top of mind.  A combined 38% of respondents reported either cost or quality of labor as their biggest issue.  The former of which actually improved in November while the latter surged 5 percentage points.  That was one of the largest one-month upticks to date and leaves it at a record high. Meanwhile, there have been been a couple of other indices hitting record lows: competition from big businesses and financial conditions and interest rates.  Poor sales also came in the bottom 1% of readings.

While the largest share of companies see cost or quality of labor as a concern and the combined reading was higher versus October, that was still below the peak of 40% set in September. 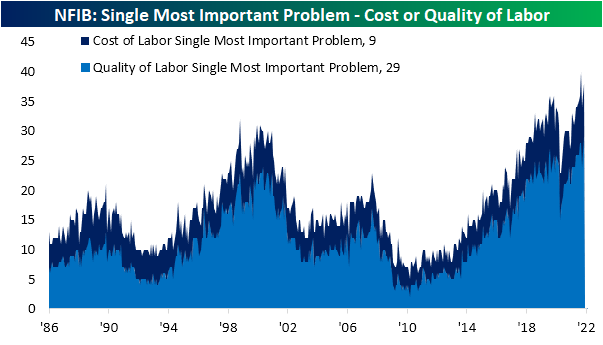 Panning across the other problems, other than labor, inflation is the other key issue for small businesses.  The percentage of respondents reporting inflation as their biggest issue has surged in recent months gaining another two percentage points to 18% in November.  As shown below, the only other time in which as high of a share of respondents saw inflation as the biggest issue was in 2008. While there is not enough information to distinguish what the exact problems are, “other” also plummeted in November after a brief spike higher in October. 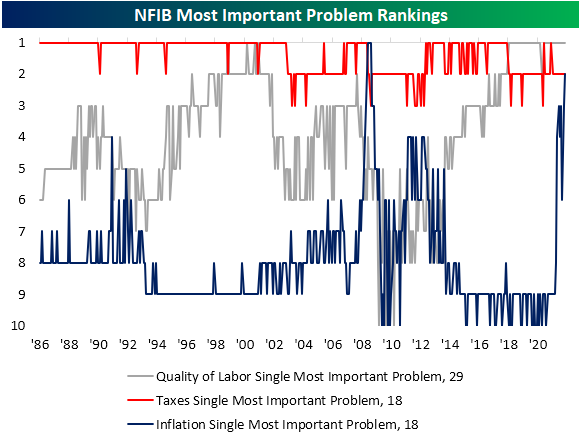