In an earlier post, we detailed the latest NFIB survey of small business optimism.  Included in that report are survey results of what small businesses are reporting to be their most important problems to their business.  As could be expected with CPI continuing to run in the 7% YoY range, inflation remains top of mind.  32% of respondents to the November survey reported inflation as their biggest concern, slightly outnumbering those reporting cost or quality of labor as the biggest issue.  While that continues to be a historically large share of responses, the reading did fall one percentage point month over month as it remains off the peak of 37% in July. 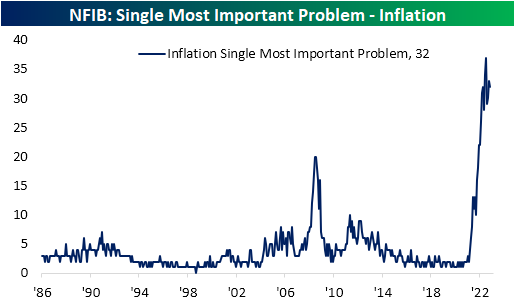 As previously mentioned, behind inflation, the cost or quality of labor (combined) is the next biggest issue for small business, accounting for 30% of responses.  That matches the readings from this past July and March for the lowest readings since January 2021.  Paired with the other labor related indices of the report, these figures point to some softening of the labor market. 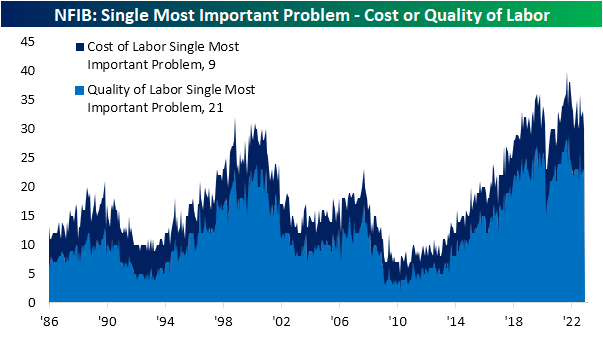 The November report of course coincided with the midterm election.  Historically, the NFIB survey has been fairly sensitive to political happenings and the reading on the percentage of respondents reporting government red tape or taxes as their biggest issues has been a good proxy for this.  In the past, the reading has tended to be higher during Democrat administrations and lower during Republican administrations.  However, during President Biden’s time in office, high inflation has resulted in few respondents seeing political related problems as their biggest issue. That was re-emphasized in November as the reading returned to tie July’s record low of only 16%. We would note that this reading has the potential to turn higher given that past midterm months like 1990, 2002, and 2018 have marked short term spikes lower and higher. 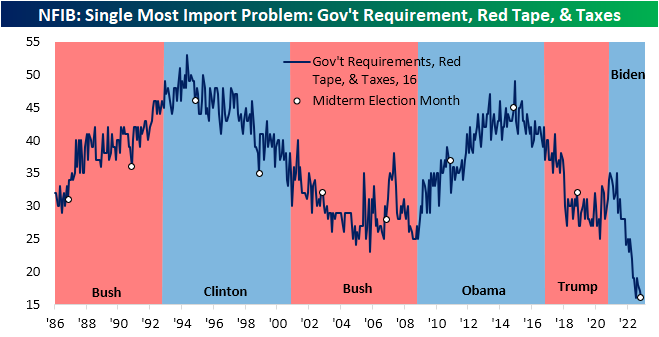 With those biggest issues all seeing a lower share in November, it begs the question of what problems replaced them? Poor sales (+1 ppt), Cost/Availability of Insurance (+2 ppt), Competition from Small Businesses (+2 ppt), and Financial & Interest Rates (+2 ppts) all saw higher readings last month.  Of those problems, the latter two are perhaps the most interesting.  Historically, neither of these two issues have tended to rank particularly high up among the ten choices given in the survey, but in the past year their share has been decimated without anyone reporting them to be the biggest problems at certain points.  That is less so the case today.  Competition from big businesses has risen back up to 5% of responses; a reading that would have been similar to much of the first half of the 2010s previously. 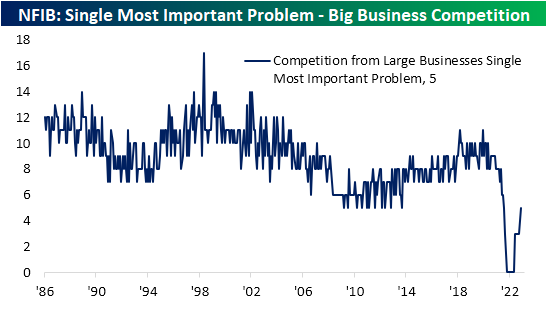 Meanwhile, as interest rates have risen rapidly, 3% of responses saw problems with financials and interest rates.  Although that is not a large share of total responses, it was the highest share in nearly four years. The NFIB survey is a relatively minor data point and this issue accounts for an overall small share of responses meaning it is highly unlikely this would so much as be considered in regards to monetary policy, however, one potential takeaway of these responses is that small businesses are at least beginning to see some negative impacts of a higher rate environment. Click here to learn more about Bespoke’s premium stock market research service. 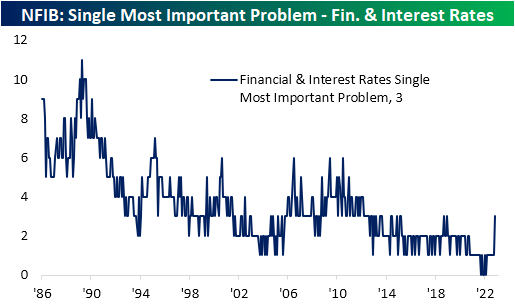