The major indices are broadly lower in the past week with the exception of the Dow which has risen just over 1%. The Nasdaq on the other hand has been the worst performer falling almost 3%.  Even though the major indices are split in terms of performance, sentiment has gone the way of the Dow as bullish sentiment as measured through the AAII weekly survey rose 1.7 percentage points to 44.3%.  While not a particularly large increase, this week did mark the first time bullish sentiment has risen in a month. 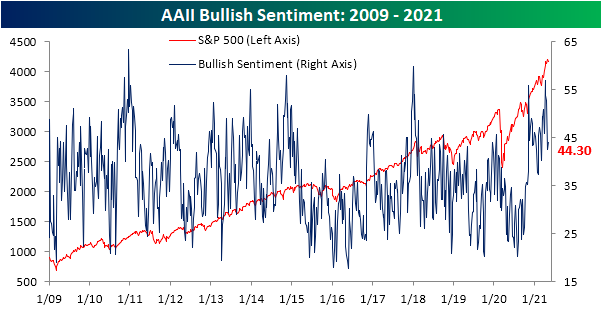 With bullish sentiment higher, fewer respondents reported as bearish.  Only 23.1% of investors reported pessimistic sentiment; down 2.6 percentage points versus last week’s reading.  Just like bullish sentiment, that was not a particularly large change, and it leaves the reading in the middle of the past several weeks’ range. 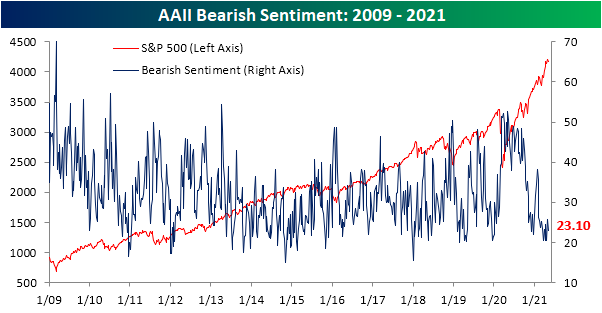 The inverse moves in bullish and bearish sentiment resulted in the bull-bear spread climbing 4.3 points to 21.2.  While that is still at the high end of the past few years’ range, it is 11 points below where it stood only two weeks ago. Looking at another sentiment survey from Investors Intelligence which targets equity newsletter writers, the bull-bear spread also rose slightly week over week leaving the spread well below levels from only a couple of weeks ago.   In other words, sentiment has moderated recently, but it has not dramatically shaken a historically bullish tone. 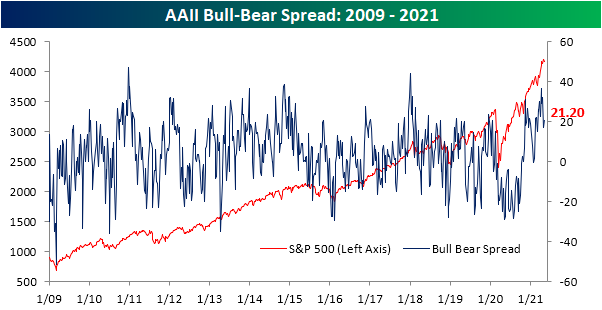 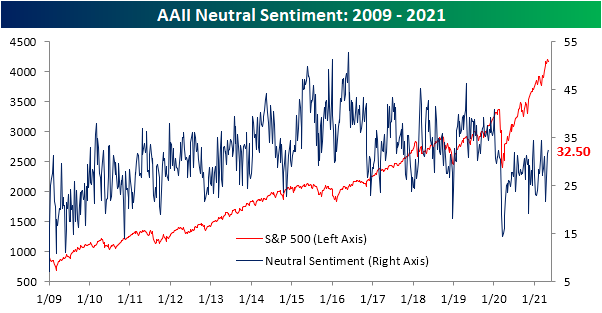 The NAAIM Exposure Index is yet one more sentiment reading that also has shown some moderation but remains at a generally bullish level.  This index reflects the average exposure to US equities of members of the National Association of Active Investment Managers. Readings of 200 would indicate they are leveraged long on average, 100 would be fully invested, 0 would be market neutral, -100 would be fully short, and -200 would be leveraged short. Last week saw this index tip above 100 for the first time since mid-February which also ranked in the top 2% of all readings going back to 2006. This week it fell 15.93 points. That stands in the bottom decile of weekly moves and was the largest drop since late March, but at 87.79, the index still points to historically bullish positioning among active managers. Click here to view Bespoke’s premium membership options for our best research available. 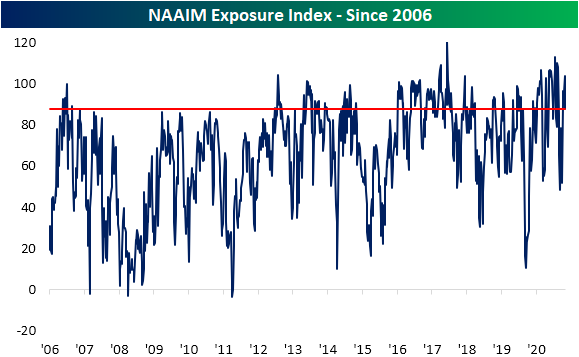