As mentioned in a prior post, in the past week the S&P 500 has moved within 2% of its 2/19 high, but at the same time, less than a quarter of AAII respondents are optimistic for the future of stocks over the next six months.  That begs the question- if there have been past times that sentiment and price action have been so detached from one another. Since the start of the AAII survey in 1987, there have been 10 periods (including the current one) in which the S&P 500 was within 2% of an all-time high but bullish sentiment was less than 25% without another occurrence in the prior three months.  The most recent prior occurrence was not even a full year ago. Back in October, sentiment was only slightly higher as the S&P 500 was 1.84% from its all-time high.  Prior to that, there were some scattered instances throughout 2013, 2015, and 2016 but before that, you would have to go back to 1993 to find another similar period.  The one occurrence in 2013 stands out as it was both the lowest sentiment reading of these prior occurrences and the only one that occurred with the S&P 500 right at an all-time high.

As for where things stand after such instances, sentiment has tended to reverse higher in the following six months as the S&P 500 has tended to move higher.  The S&P 500 has actually tended towards better than average returns over the next three months, although performance six months out has been modestly worse than average, even as it has been higher more often than not. Additionally, as shown in the second chart below, of the more recent occurrences of the past decade, they haven’t marked any major top or bottom for the S&P 500 with occurrences clustered both coming off of lows and in the middle of longer-term uptrends. Click here to view Bespoke’s premium membership options for our best research available. 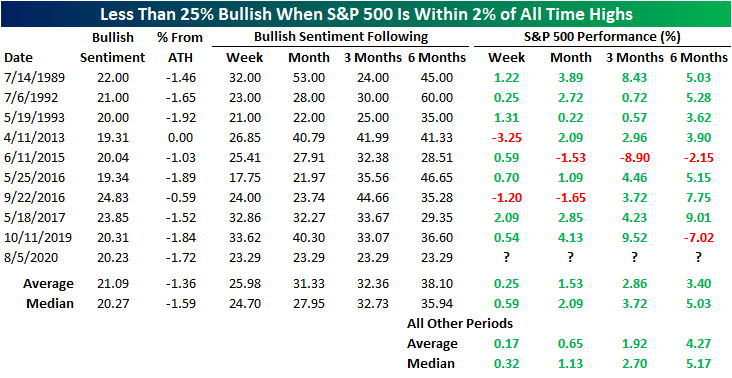 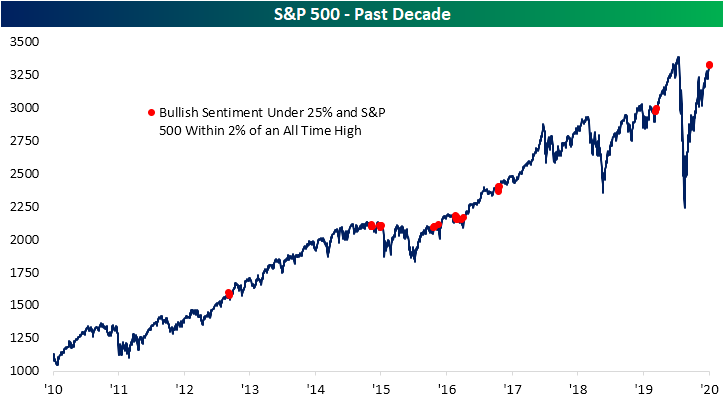