Glancing across the ETFs tracking the stock markets of the 23 countries in our Global Macro Dashboard, broadly there has been some downside mean reversion in the past week.  Whereas all but three countries were over one standard deviation above their 50-DMAs last week, today that number has been roughly cut in half with only 11 countries still overbought. Many of those today are even sitting on the cusp of falling out of overbought territory. The top-performing country in the month of April was Taiwan (EWT), but over the past five days, it has been the worst performer of the group resulting in one of the biggest moves within respective trading ranges.  EWT is now in neutral territory compared to extreme overbought levels last week.  Another APAC country to have seen a massive move in its trading range was Malaysia (EWM). EWM fell from overbought levels all the way through its 50-DMA to oversold territory.

Elsewhere in the region, two other notable countries are India (INDA) and Japan (EWJ). As we noted in last week’s Bespoke Report,  there were very few losers across asset classes in April, but two exceptions were India and Japan which fell 2.75% and 1.61%, respectively.  As such, these were the two worst-performing country ETFs in April.  While INDA was the worst performer last month, in the past week it is outperforming the rest of the world with a 30 bps gain.  That compares to a 1.14% average loss across all 23 countries.  That is also far better than the 1.48% average decline for emerging market countries. 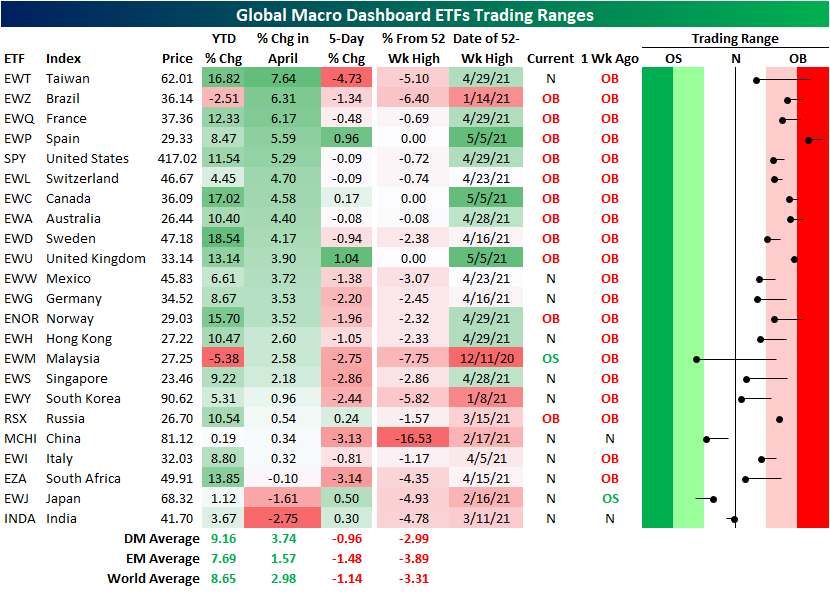 The major factor in the weakness in Indian equities recently has been the deteriorated COVID situation in the country. As shown below, new COVID cases per day per million bottomed in mid-February but have grown exponentially ever since.  Currently, new cases per day per million people are running at a pandemic high of 276.2. Interestingly, that upswing in cases coincided with the equity market stalling out and entering a short-term downtrend. Recently, case counts continue to grow albeit that growth rate has slowed a bit.  Hand in hand with that slowdown, INDA has begun to turn higher and has broken the downtrend that has been in place since the March 11th 52-week high. Today, it is trading 1.76% higher and is even testing its 50-DMA from below.  In both cases, those small reversals in trends are welcome signs but there is still plenty of room left for improvement.  Click here to view Bespoke’s premium membership options for our best research available. 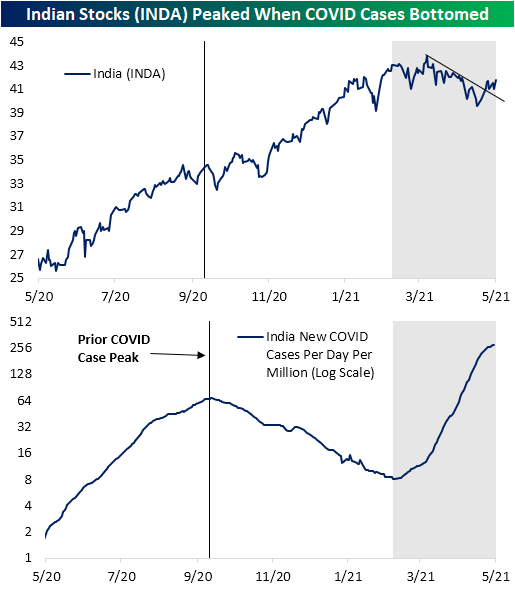