The S&P 500 has been holding up at its 50-DMA in the past week while more speculative areas of the market (i.e. crypto) have experienced wild swings. As a result, sentiment on the part of individual investors has not seen much of a move.  The American Association of Individual Investors‘ weekly reading on bullish sentiment was little changed this week climbing half of one percentage point to 37%.  Although that was not a large move in the past week, sentiment has taken a big hit over the past month having fallen from well above 50%.  In spite of that big drop and even though sentiment is around the lowest levels of the past half-year, the current sentiment level is within one percentage point of the historical average. In other words, optimism is low versus recent history but is very much middling from a longer term perspective. 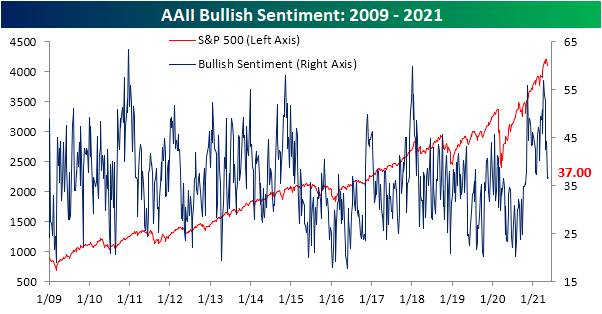 Meanwhile, bearish sentiment fell 0.7 percentage points to 26.3%.  Unlike bullish sentiment, that is a bit lower than the historical average of 30.5% 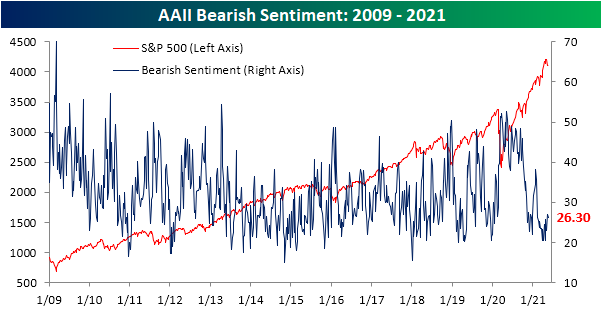 Those corresponding moves meant the bull-bear spread climbed to 10.7 from 9.5 the prior week.  Excluding last week, that is still one of the lowest readings since February. 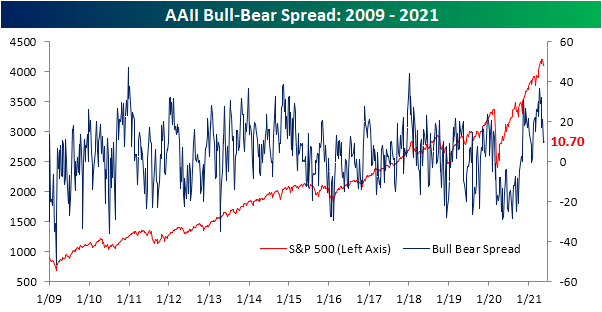 Neutral sentiment has been the star of the show recently. The gain this week was tiny at only 0.2 percentage points, but nonetheless, it marked the fifth consecutive week in which neutral sentiment has risen.  At 36.7%, it is now at the highest level since the second week of 2020. 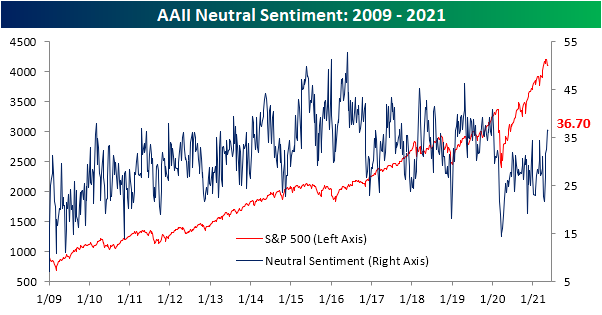 The Investors Intelligence survey of equity newsletter writers took a less optimistic tone this week as bullish sentiment fell 4.1 percentage points to a ten-week low of 54.5%.  Bearish sentiment was unchanged at the highest level since the end of March.  The survey also questions respondents on whether or not they expect a correction.  That reading rose 4.1 percentage points to 28.3% in the biggest one-week uptick since the last week of April when it rose 4.7 percentage points. That leaves the reading at the highest level since the week of March 10th.  Before that, you would need to go back to September 23rd to find as high of a reading. 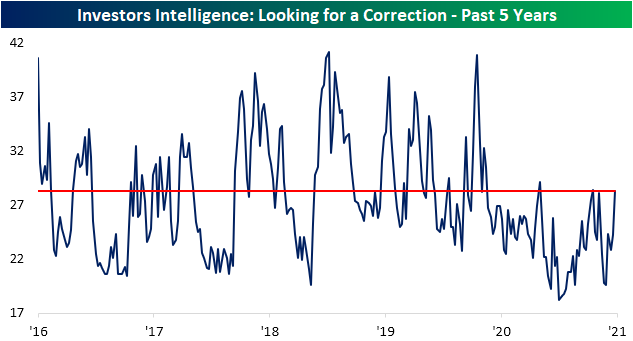 Another sentiment reading that has taken an even more dramatically negative tone lately has been the National Association of Active Investment Managers Exposure Index.  This index measures how exposed to equities managers are where readings of 200 would mean they are leveraged long, 100 would be fully invested long, 0 would be neutral, -100 is fully short, and -200 is leveraged short.  This week saw the index fall another 2.65 points after a massive 40-point decline last week. That is the lowest level since last March and April of last year. Altogether, while sentiment still favors bulls, there has been a more cautious tone that has been reflected in managers reducing exposure to equities.  Click here to view Bespoke’s premium membership options for our best research available. 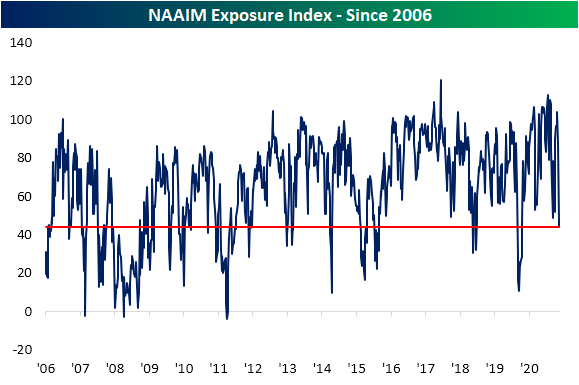