Last week’s initial jobless claims number was revised higher by 5K to 345K. Partially thanks to that upwards revision and a big drop this week, claims fell by 35K for the biggest one-week decline since the last week of June.  That sizeable decline brings initial claims to the lowest level of the pandemic at 310K on a seasonally adjusted basis. 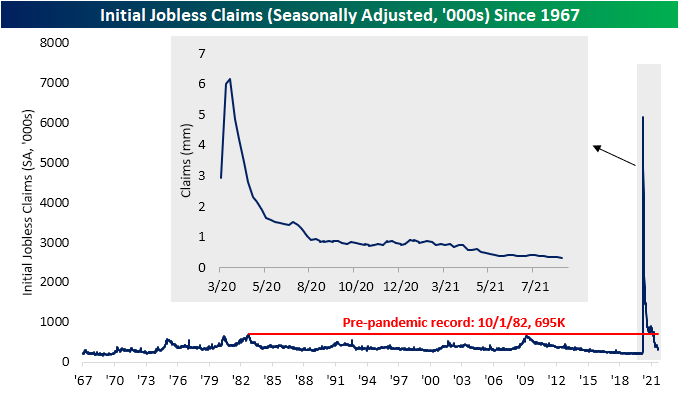 On a non-seasonally adjusted basis, claims are actually below 300K as has been the case for the past three weeks now.  This week marked the seventh in a row that unadjusted regular state claims have fallen week over week making for the longest stretch of consecutive declines in the number since a 13-week long run ending in the first week of July last year. Factoring in Pandemic Unemployment Assistance (PUA), claims totaled a pandemic low of 380.5K thanks to a drop back below 100K by the PUA program.  With that said, the program is also nearing its end. 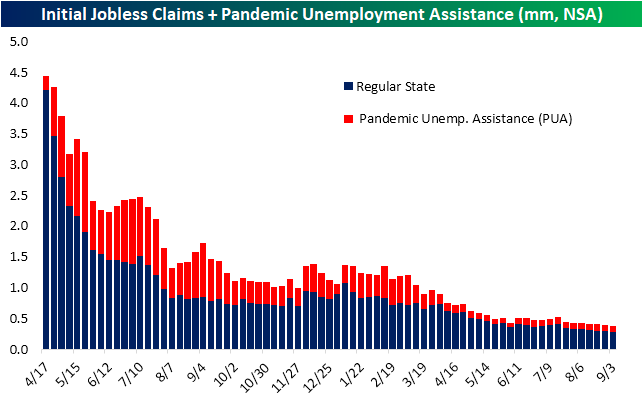 Lagged an additional week to the initial claims number, continuing claims also set a new low this week.  Through the final week of August, continuing claims dropped for a second week in a row to 2.783 million (2.74 million expected) from 2.8 million the prior week.  That reading is roughly 1 million above the pre-pandemic reading (1.784 million on March 13, 2020. 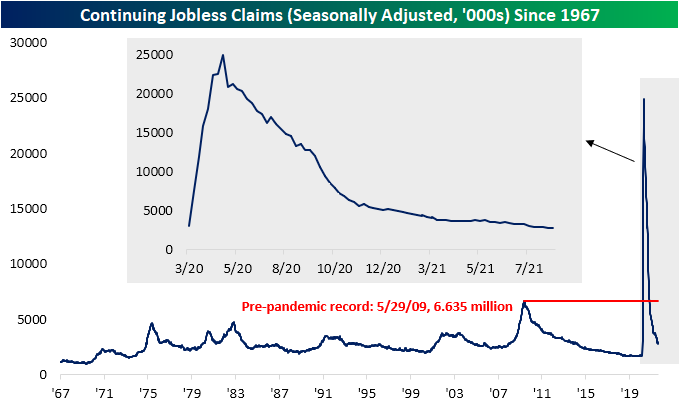 There is yet another week of lag to the data when all programs are included. Factoring in all auxiliary programs, the most recent data is through the week of August 20th. Total claims for that week were still above the low of 11.8 million from the last week of July, but they did cross back below 12 million.  The biggest contributors to that decline were PUA claims which fell by 322.7K to 5.051 million and regular state claims which fell by 135K. Other programs, namely extended benefits, weighed on claim counts. The extended benefits program has been notably volatile over the past few months now, and that continued in the most recent week of data.  The program rose from a near pandemic low of 114.4K to 311.3K which is at the upper end of the past several months’ range. 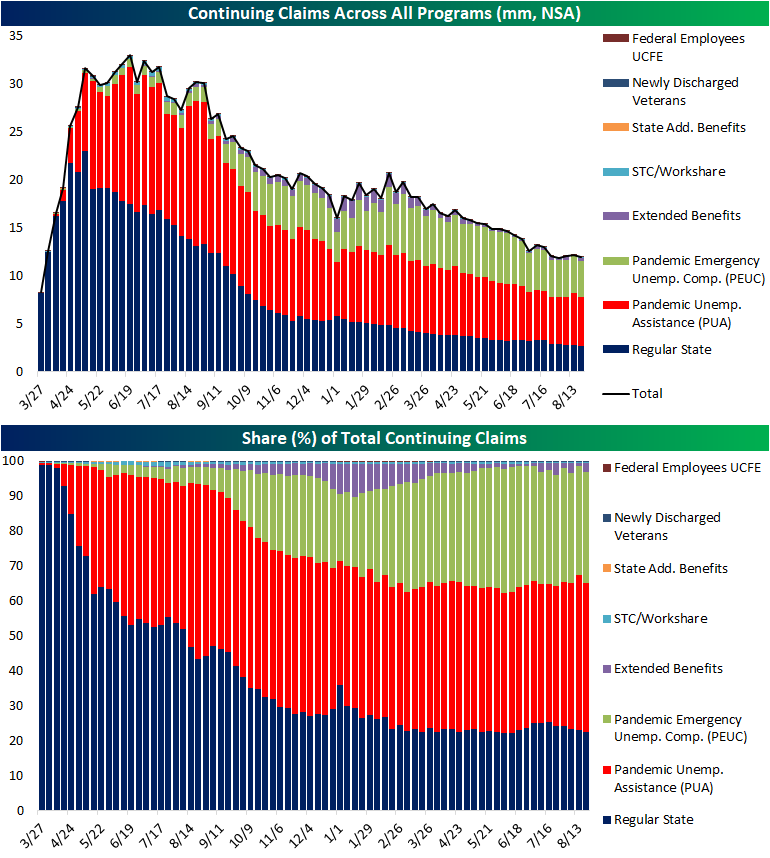 One other interesting point to note on this week’s claims data was the impact of Hurricane Ida. Regular state claims fell by 8K nationally on a non-seasonally adjusted basis this week, and that count would have been much better without the epicenter of recent hurricane news: Louisiana.  With the state still recovering from the storm, claims more than quadrupled this week. In fact, the increase was even larger than that of the most populous state, California, which saw claims rise by 5.6K.  Click here to view Bespoke’s premium membership options. 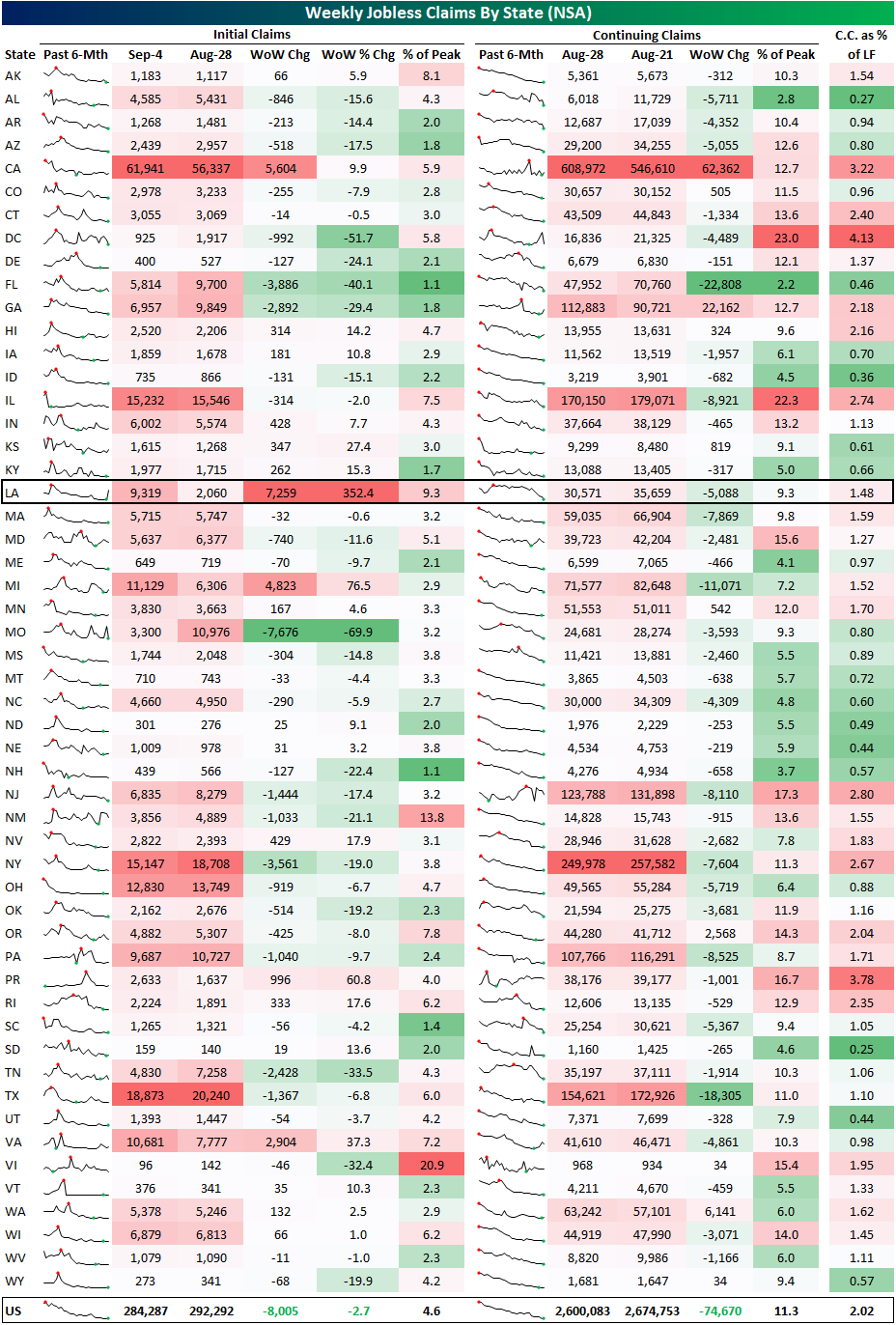