Today, Starbucks (SBUX) announced that Howard Shultz would assume the reins of CEO for the third time. When the company IPO’d in 1992, Shultz was at the helm and remained there until 2000, when he passed the torch to Olin Smith. In 2005, Jim Donald assumed the role, before Shultz returned as CEO in the heart of the great financial crisis (2008). In 2017, Shultz passed the role on once again, and Kevin Johnson became CEO.

Today’s news has the stock up sharply, and when looking at the historical performance of SBUX when Schultz was at the helm, today’s rally makes sense.  During his first stint as CEO, SBUX booked an annualized return of 37.8% (not including dividends), which is the highest of any CEO in the company’s history. His first successor, Orin Smith, also saw strong gains during his tenure, but when Smith left, the stock’s performance under Jim Donald was lousy with an annualized decline of nearly 12%.  With SBUX seemingly losing its way, Howard Schultz stepped back into the CEO chair, and the stock surged with annualized gains of 22.2% from 2008 until he handed the reins over to Kevin Johnson in 2017.  Performance under Johnson’s tenure, however, has been lacking with annualized gains of ‘only’ 7.4%. 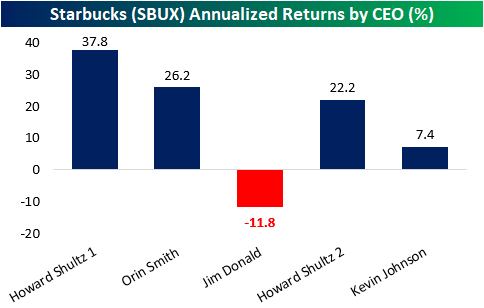 Below is a graph summarizing the performance of SBUX relative to each CEO’s tenure. As you can see, Kevin Johnson would have done quite well if not for the massive pullback that occurred over the last few months. Due to factors beyond Johnson’s control, SBUX is currently over 29.3% off its highs. Shultz has worked through broader market pullbacks before, and after stepping back into the CEO role in 2008, the stock performed incredibly well until news hit that he would be leaving the helm again. 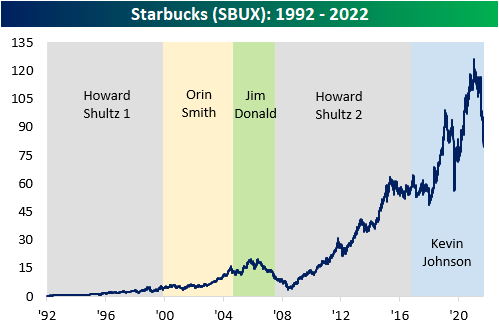 Although the above chart is relevant, there were a multitude of economic and political factors that affected performance during each CEO’s tenure. To help adjust for market moves, we also looked at the relative strength against the S&P 500 to determine a truer sense of each CEO’s strength as a leader. Shultz’s last tenure in office was astoundingly strong relative to the performance of the S&P 500. Johnson has struggled to deliver the same alpha as Shultz, only passing him on a relative strength basis for a brief time. The current relative strength reading is below that of the last day of Shultz’s last tenure, which may explain Shultz’s return and the fact that the stock is rallying on the news. Jim Donald is the only other CEO to have seen a loss in relative strength during his tenure. Click here to try out Bespoke’s premium research service. 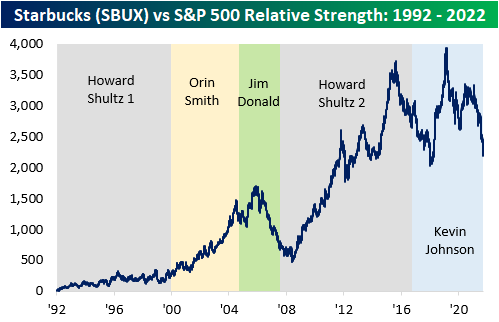 None of the information in this post or any opinions expressed constitutes a solicitation of the purchase or sale of any securities or commodities. This is not personalized advice. Investors should do their own research and/or work with an investment professional when making portfolio decisions. Past performance of any investment is not a guarantee of future results. Bespoke representatives or clients may have positions in securities discussed or mentioned in its published content. See our full disclaimer at bespokepremium.com/interactive/legal/.