“How Much Was the Market Up Today?”

We’re old enough to remember when stocks would sometimes trade down when the market was open.  These days not so much.  For both the S&P 500 (SPY) and Nasdaq 100 (QQQ) tracking ETFs, there hasn’t been a single day since March 25th that either one closed the day lower than it opened.  That’s an incredible streak of 13 straight trading days, and for both ETFs – which have been in existence for more than 20 years – it’s a record. 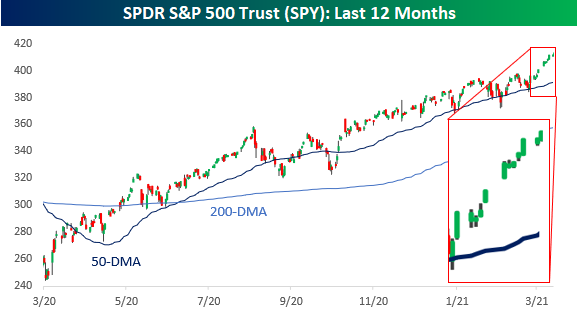 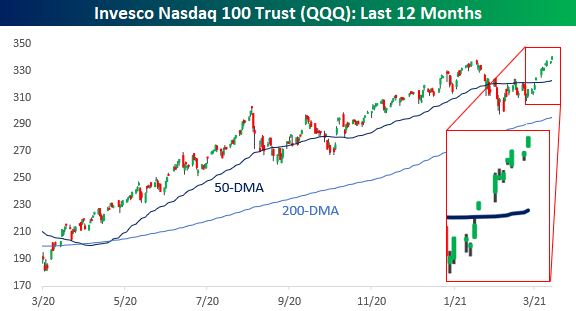 In the case of SPY, there have only been five other periods in the ETF’s history (all after 2005) where SPY was positive from the open to close for ten or more trading days.  The prior record for consecutive open to close gains was 12 trading days back in January 2013, and the most recent was in February 2015 (ten trading days). 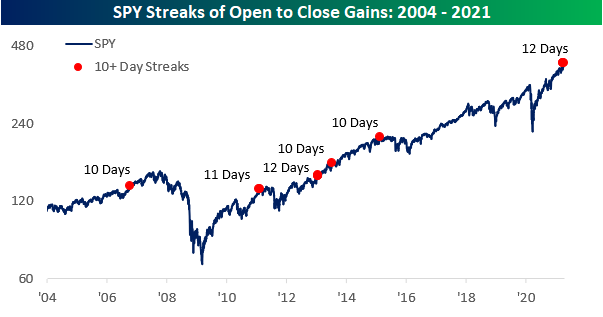 For QQQ, streaks of ten or more trading days of open to close gains have been a bit more common with eight prior streaks (again all after 2005).  Prior to the current streak, there were two other streaks of 12 trading days (July 2009 and February 2017), but the most recent streak of 10 or more days was back in early December 2020.

Given the positive correlation between the S&P 500 and Nasdaq 100, you would think that, like the current streak, many of the prior streaks overlapped with each other.  However,  the only two periods besides the current one where there was any overlap between the two streaks was back in October 2006 and February 2015.  If you remember the year that followed February 2015, unless you’re underweight equities, you’re probably not hoping for a repeat of that period.  Click here to view Bespoke’s premium membership options for our best research available. 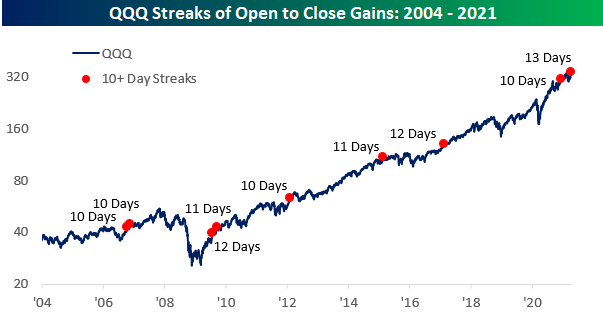