How Has the 10 Year Yield Historically Correlated to Growth Stock Performance?

Recently, all it seems investors can talk about is the relationship between the performance of growth stocks and interest rates. The general idea is that rising yields have a negative impact on the performance of growth stocks as the risk-free rate of return increases and future cashflows for high-growth companies are discounted at a higher rate.  To highlight this relationship, today we wanted to take a look at a comparison between the relative strength of the Vanguard Mid Cap Growth ETF (VOT) versus the Vanguard Value ETF (VOE) versus the yield on the 10-year US Treasury.

Looking first just at the relationship between the two this year, the chart below shows the relative strength of growth vs value (blue line) compared to moves in the 10-year US Treasury (red line).  When the blue line is rising, it indicates that growth stocks are outperforming value and vice versa. For pretty much the entire year, when yields have moved higher, growth stocks have underperformed, but when yields have pulled back, growth stocks start to lead the market.  Over the last several days, the inverse relationship has been even more pronounced where the two lines have completely moved in the opposite direction.  For this year at least, higher interest rates have been kryptonite for growth stocks.

The chart below is the same as above but goes all the way back to 2010 instead of just this year.  Looking at the chart, while there were periods of inverse correlation in the early and mid-2010s, the trend really didn’t fully take hold until late 2018/early 2019.  Since then, when rates have fallen, growth has outperformed and vice versa. 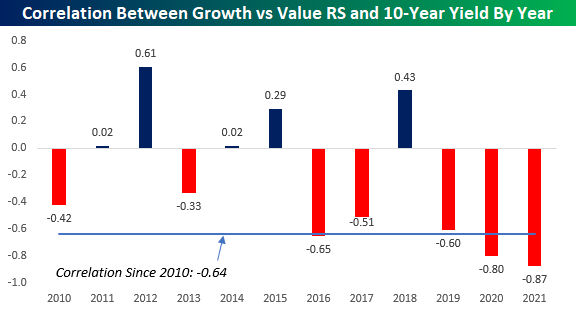