The third quarter has come to an end, which means that the Q3 earnings season will be in full swing before you know it.  This week, though, only a handful of names are scheduled to report.  One of the bigger names reporting is Lamb Weston (LW) which reports Wednesday before the open.  What exactly is Lamb Weston?  If you’re unfamiliar with the company, a google search comes up with the listing below, which shows that the company describes itself as a producer of “Innovative Frozen Potato Products,” or what most of us call French Fries.  The company is one of the leading suppliers of french fries and other frozen potato products to the foodservice and retail sectors. In the retail sector, you may better know the company by its “Grown in Idaho” brand found in supermarket freezers.

French fries have to be one of the most stable businesses in America.  When given the option, who doesn’t choose a side of fries to go with their burger?  One problem with french fries, though, is that unless you have a deep fryer in your kitchen, they’re never as good at home as they are at a restaurant.  For that reason, companies like Lamb Watson (LW) have always had a much higher percentage of their sales coming from the food-service channel than the retail channel.  That was until COVID.  The chart below shows the quarterly sales breakdown for LW between foodservice and retail segments in the United States.  The company also has other units like International which comprise the rest of its sales.

For years now, Lamb Watson has seen a pretty consistent trend of sales in its Foodservice and Retail segments.  Foodservice consistently accounted for around 32% of total sales while the company’s Retail unit was much smaller accounting for less than 13% of total sales.  In the span of just one quarter, though, LW’s sales mix completely reversed with Retail seeing its share of total sales nearly double from 14.1% up to 23.8% while Foodservice sales saw its share of sales plummet by a third falling from 30.2% down to 20.8%.  With restaurants closed, subpar french fries were better than no fries at all and within a matter of weeks, french fries in the grocery store were just as scarce as toilet paper.

In the company’s last earnings conference call, it noted the shift from restaurants to retail but also noted increased costs associated with re-tooling manufacturing for the added demand, so the company should manage to adjust to the shifting demand profile.  When you think about COVID and its impact on different sectors of the economy, french fries probably weren’t the first thing most people would think about, but just because it wasn’t top of mind doesn’t mean that the impact was insignificant.  Earnings season is almost here.  To stay on top of the latest trends with company reports, make sure to check out or Interactive Earnings Explorer tool.  Click here for a free two-week trial! 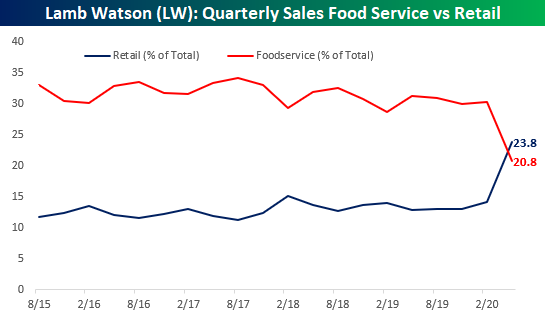