The latest data on residential housing for the month of February generally came in better than expected today and showed some positive longer-term trends.  Starting with the actual numbers, Housing Starts increased 6.8% m/m, and while growth in multi-family units was higher than the headline number, single-family units still showed healthy growth of 5.7%.  Building Permits actually showed a modest decline in February, falling 1.9%, but single-family units barely even declined.  On a regional basis, despite weaker sentiment from homebuilders in the Northeast in yesterday’s report from the NAHB, both Housing Starts and Building Permits in the Northeast grew more than 20% m/m which was easily the strongest showing of any region. 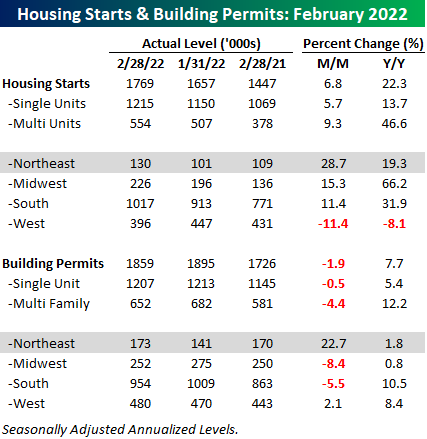 From a longer-term perspective, the 12-month average of Housing Starts made another post-financial crisis high in February rising to its highest level since March 2007.  Typically, this reading starts to roll over well in advance of a recession, so the fact that it’s hitting multi-year highs now should provide some relief to those who are concerned about the flattening of the yield curve. 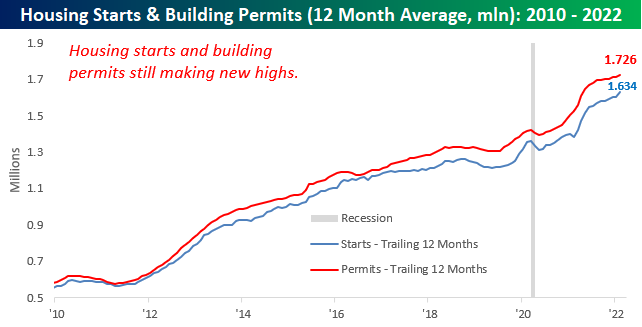 Finally, the chart below shows the 12-month average of single-family Building Permits and Housing Starts.  For much of the last year, the average of single-family units was starting to show signs of rolling over as supply chain issues slowed down activity in the sector.  Given housing’s leading nature relative to the business cycle, this was somewhat concerning, even if the issue was more supply rather than demand-driven.  February’s report, though, was encouraging in that both Permits and Starts showed increases again in their 12-month averages.  Click here to view Bespoke’s premium membership options. 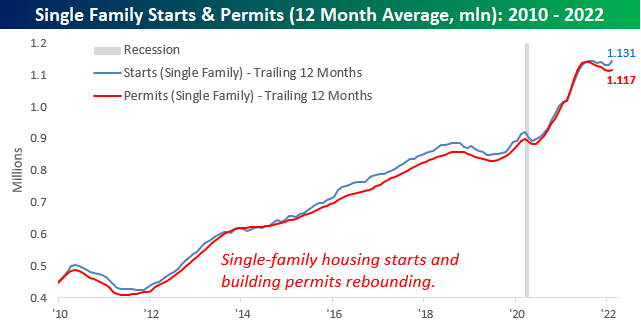