Housing: More Affordable Than It Looks

With the surge in home prices since the COVID pandemic hit, there are big concerns that housing has become much less affordable. But context is important. In addition to the price of a house, affordability should also take into account income supporting a given purchase and the interest cost of the debt borrowed to buy a home. In the first chart below, we take the median existing home sales price, assume a 20% down payment, and then calculate the implicit monthly payment cost to cover it based on national average mortgage rates. Then account for changes in income over time by expressing that dollar payment amount in terms of hourly wages, specifically the average hourly wage of production and non-supervisory employees. As shown in the chart, relative to labor income and interest rates, housing does not look particularly unaffordable at all, with 44.7 hours of work covering a monthly payment. That compares to around 55 hours in the early-2000s (prior to the subprime bubble) and 40 hours in the mid-2010s. Of course, lower interest rates do not help with down payments.

The median existing home’s down payment has soared in hours worked terms. It’s worth remembering, though, that first-time buyers can put down as little as 5%, and even twice that much down requires substantially fewer hours worked than a 20% down payment required in the late 1990s or early 2000s.

Taken together, we would argue that for existing homes, the current market is challenging, but that the level of home prices are not wildly unsustainable, and actually make quite a lot of sense. 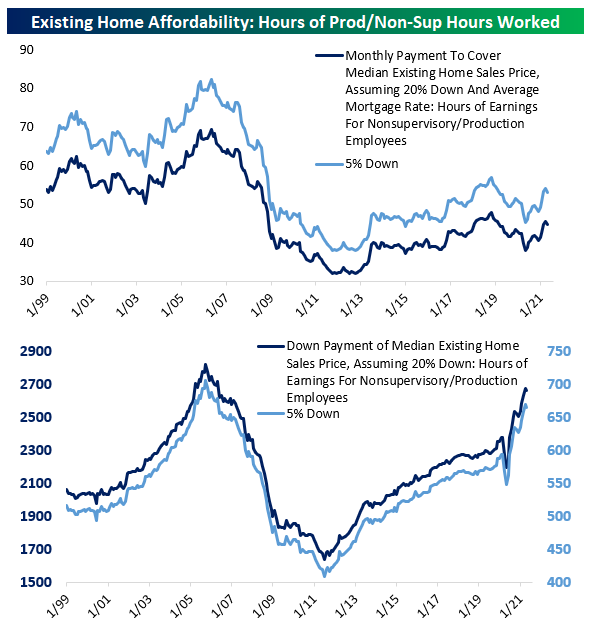 While the new home market is a much smaller segment of the housing market and tends to target existing owners rather than new buyers, we still think performing a similar analysis is helpful. When we do, we see a very similar story as the one told by the existing home market but with a much longer-term data set. As shown, the monthly carrying cost of a new home is low versus history in hourly wage terms, though it has increased somewhat in the last few months. We also note that while the down payment for new homes is high versus wages, the current level is below the pre-COVID peak as well as the subprime bubble peak. New home prices have been far more under control than existing home prices, so if anything, affordability is even better for new home buyers. Bottom line: home prices are rising quickly and that appears to be stifling demand, but the rapid price increases of the last 18 months have largely been offset by large gains for hourly wages and the drop in interest rates over the same period.  Click here to view Bespoke’s premium membership options. 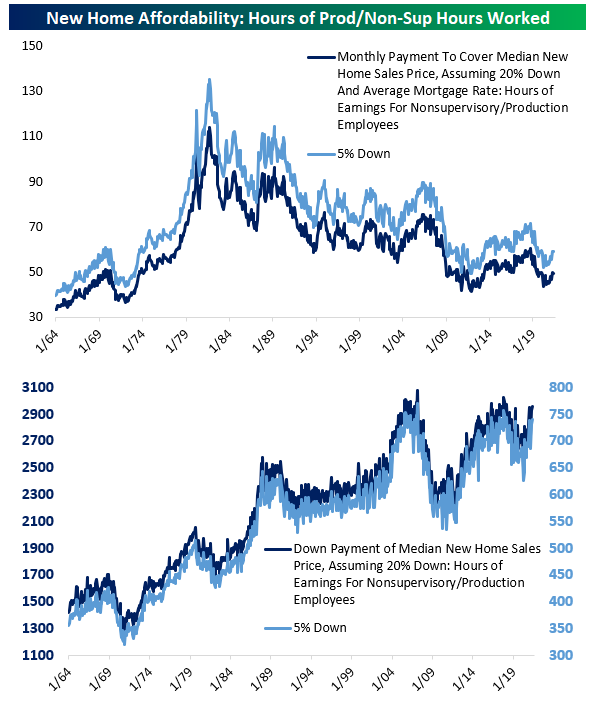