Housing Indicators Off the Charts

It has been a very strong couple of weeks for housing-related indicators as recent reports on Building Permits, Housing Starts, Existing Home Sales, and New Home Sales have all exceeded forecasts.  Using data from our Economic Indicators Database, we found that it isn’t often that all four indicators come in better than expected in the same month.  Going back to the start of 2006, there have only been 12 months in a total of 165 where all four indicators exceeded forecasts. While similar scenarios have been relatively uncommon in the past, more recently, we have seen an uptick in the number of occurrences.  Of the 12 occurrences, six of them have occurred since the middle of 2016, and before that, there was a five year stretch without a single occurrence. 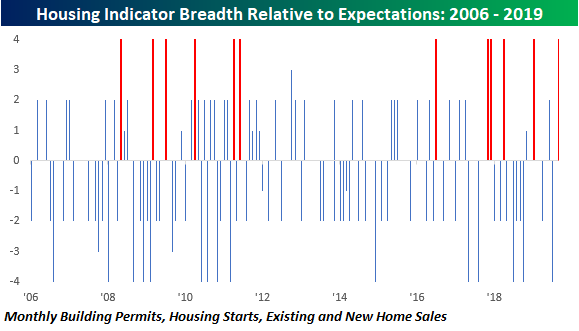 In addition to these four housing-related indicators all beating expectations this month, they have also done so by a wide margin.  Of the four indicators we looked at, the reported readings exceeded consensus expectations by a total of 397K.  The chart below shows the total spread between the actual readings in the four housing indicators noted and total expectations and have colored the months in red where the total spread was equal to or above this month’s total.  Again, of the 165 prior months for which we have data on all four indicators, only five saw a higher spread between the actual reported readings and expectations.  Between the positive breadth and the wide margins between the actual and estimated readings, strength of the type we saw in August housing data doesn’t come around too often. Start a two-week free trial to Bespoke Institutional to access our popular Earnings Explorer tool and our full Research Dashboard. 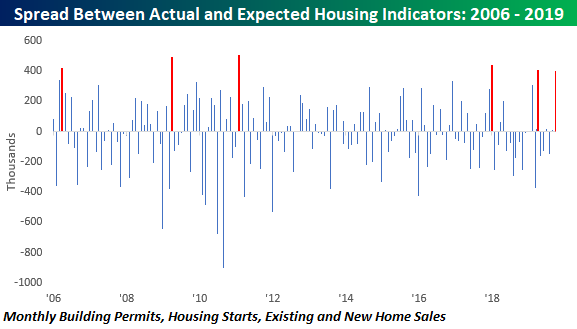