Updates on Building Permits and Housing Starts were mixed relative to expectations for July. While Building Permits exceeded forecasts by 34K, Housing Starts missed forecasts by 81K falling to the lowest annualized rate (1.446 million) since February 2021. Housing represents a large share of the US economy on both a direct and indirect basis, so its health says about the state of the overall economy,  Below we have updated our chart of Housing Starts on an average 12-month basis overlaid on top of recessions.  Every recession since the late 1960s has been preceded by a rollover in the average rate of Housing Starts, and usually, the rollover starts well in advance of the recession.

For the current period, Housing Starts remain right near their highest levels of the cycle, but if you look real closely, you can see that the level peaked three months ago.  Looking out over history, there are plenty of other periods where Starts declined for a few months but didn’t roll over.  In other words, based on what we’ve seen so far, Housing Starts have yet to show signals of an imminent recession.  Based on this month’s reading and the readings from a year ago, barring a major rebound, the 12-month average is likely to keep declining in the months ahead.  Another factor to keep in mind about the historical relationship between Housing Starts and recessions is that in most cases, the recession didn’t usually begin until months after the peak of Housing Starts.   Click here to start a two-week trial to Bespoke Premium and receive our paid content in real-time. 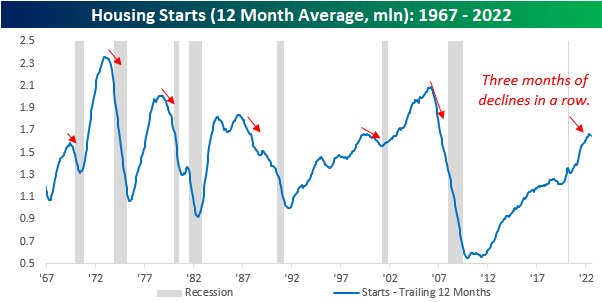 Taking a closer look at recent trends, the chart below shows the 12-month average of Building Permits and Housing Starts since the start of 2010.  It’s easier here to see the decline in Starts over the last few months.  Building Permits, meanwhile, have continued to trend higher. 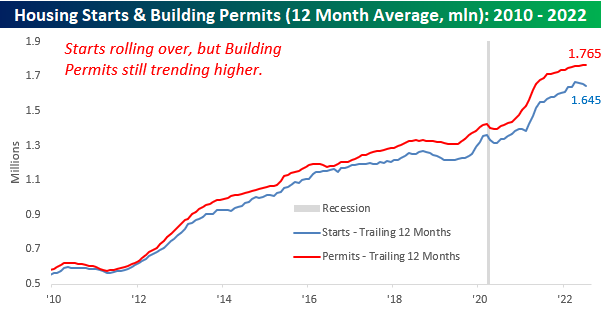 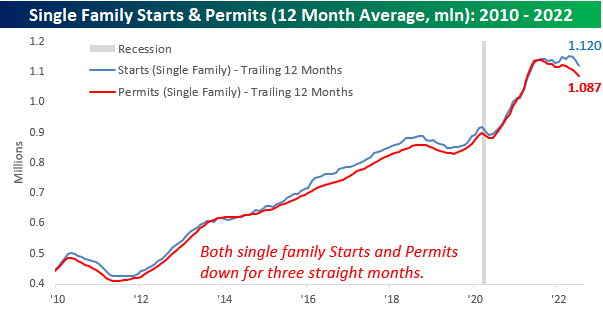 Finally, the chart below compares the performance of Housing Starts over time to the performance of homebuilder stocks using the iShares US Home Construction ETF (ITB) as a proxy.  While the two have tended to track each other over time, over the last couple of months, ITB has rallied while Housing Starts have been dropping.  Either the market knows something about future developments in the residential housing market or investors have gotten a little offside in their positioning. 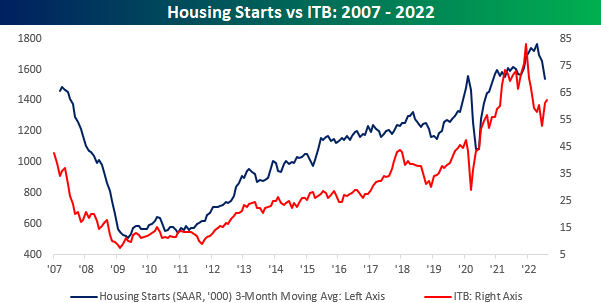