Housing Closes Out 2020 on a Positive Note

The table below breaks down the details of the December report in terms of both single and multi-family units and regions.  One of the clear areas of strength was in single-family starts and permits.  On a y/y basis, both were up over 25%, and relative to November, starts were up 12% while permits rose 7.8%.  Multi-family units, meanwhile, both saw declines with notable weakness in multi-family starts.  On a regional basis, most areas of the country saw strength although starts and permits were down m/m and y/y in the Northeast. 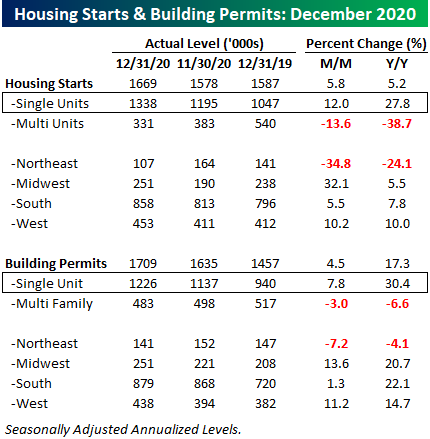 Given its overall size, you can easily make the case that as goes the housing market, so goes the economy, and history tends to bear this out.  The top chart shows the 12-month average of Housing Starts going back to 1967 with recessions overlaid in gray.  With the exception of the latest downturn, every prior recession was preceded by a rollover in Housing Starts.  Given the sudden onset of the pandemic, housing played no role in the current recession, but once the lockdowns started, the residential housing market wasn’t immune to the weakness. Whatever weakness there was didn’t last long.  As shown in the second chart below, less than a year after the recession started, both the 12-month average of Housing Starts and Building Permits have now moved back above their pre-pandemic highs. 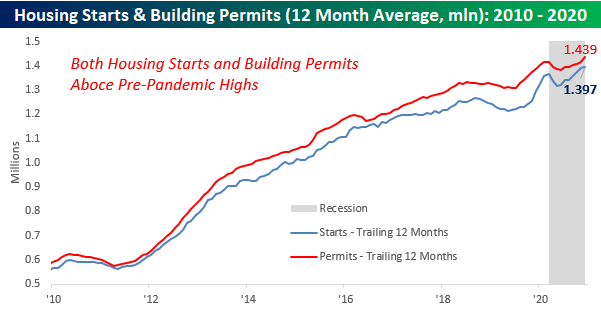 As for the stocks of homebuilders, the performance of the iShares Home Construction ETF (ITB) tends to track trends in Housing Starts and Building Permits pretty closely, so it’s no surprise that it also traded to a new all-time high on Thursday for the first time in three months.  As long as interest rates don’t see a sudden spike higher, trends in place for the residential housing market remain positive.  Click here to view Bespoke’s premium membership options for our best research available. 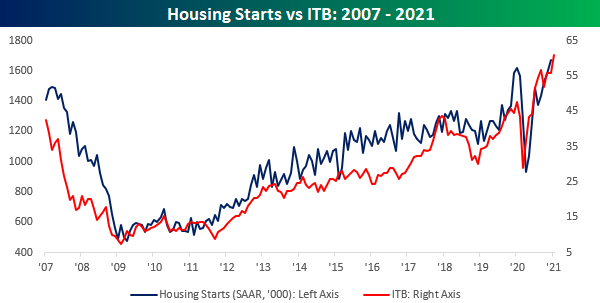 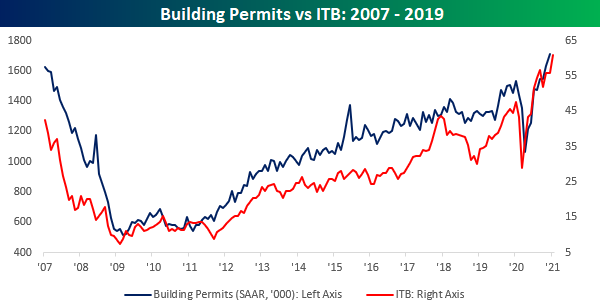