Housing Affordability Slides Out of Reach

After a massive surge in housing prices during the pandemic and recovery, the sticker price of housing has soared. Now, with the Federal Reserve starting to raise interest rates and bond markets creaking under the stress, mortgage rates are up to 4.5% and are nearing the highest levels in over a decade. The result is that the cost of occupying a home (that is, monthly payment needed to cover the cost of a house) has soared. As shown in the chart below, the mortgage payment required to cover the median existing home price at the national average mortgage rate is up nearly 30% over the past year, the fastest advance since at least 1987. 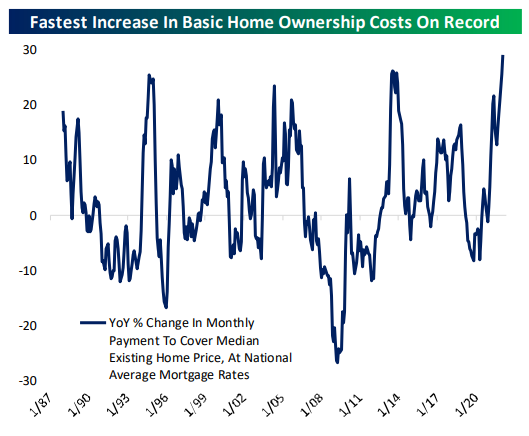 Of course, affordability is also a function of income. If wages are rising rapidly, higher mortgage rates and home prices might be offset by more income to cover those payments. To account for this, we convert the monthly payment implied by the median existing home price and the national average mortgage rate into hours, dividing it by the average hourly earnings of non-managerial workers. As shown in the chart below, at the average hourly wage today, a worker would have to work 51.1 hours to cover a monthly mortgage payment. That’s the highest since August of 2008, and shows that the combination of higher home prices and mortgage rates mean that housing is increasingly outpacing incomes. Of course, with supply still tight, demand could fall quite a bit without a big hit to home prices. But the housing market is getting harder and harder to buy in to for most Americans. That also doesn’t include the fact that down payments are rising rapidly. The median existing home required 2,756 hours worth of average hourly earnings assuming 20% down in February; that’s only been surpassed by the blow-off top for home prices in the mid-2000s. Assuming 5% down, which many first-time buyers are eligible for, the numbers look less scary with 689 hours worth of wages needed. But that’s still rising rapidly. Bottom line: housing prices are rapidly outpacing incomes and that will suppress demand, even if it might not be enough to make up for record low inventories.  This analysis was first published last Friday in The Bespoke Report, Bespoke’s weekly newsletter. To receive The Bespoke Report and all of Bespoke’s other reports covering sentiment and positioning, sign up for a two-week trial today.