Bullish sentiment towards the stock market has been lacking for years now, but it looks like we finally found out where all the bulls went – to the housing market!  This morning’s December homebuilder sentiment report from the NAHB blew the doors off expectations.  While economists were forecasting the headline index to come in at a level of 70 (unchanged from November), the actual reading rose to 76 from a seasonally adjusted November reading of 71. Not only was December’s reading the biggest beat relative to expectations since March 2017, but it was the highest overall reading since 1999! 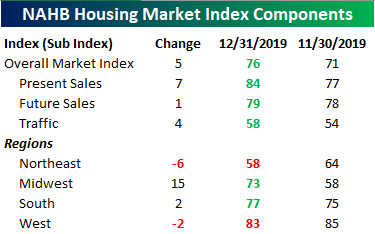 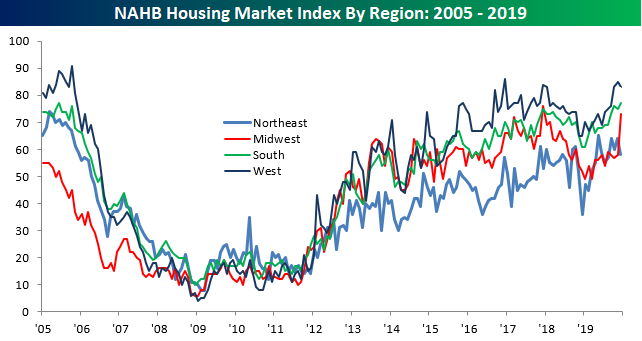 Finally, homebuilder sentiment has really taken a 180-degree turn in the last 12 months.  Closing out 2018, housing was a big question mark as the impact of the tax bill and tighter monetary policy both acted as stiff headwinds.  As the FOMC has pivoted, though, so too has the housing market, and this year’s 20-point jump in homebuilder sentiment will go down as the third-best year for sentiment in the history of the survey.  The only stronger years were 2012 (26 points) and 1992 (21 points).  Start a two-week free trial to Bespoke Institutional to access all of Bespoke’s equity market research and interactive investor tools.