Homebuilders Not Worried Yet

This morning the NAHB released results from their monthly survey of homebuilders.  The index showed some weakening in sentiment as it fell to 72 in March from 74 in February.  As with many other recent indicators released, that is a fairly modest decline given the current environment and likely would not have captured the full extent of equity market declines and shutdowns to enforce social distancing.  Granted, those effects are also not entirely absent either seeing as the NAHB noted half of the responses to the survey came after March 4th.

The headline index fell on lower readings pretty much across the board.  Each of the sub-indices with the exception of the Midwest fell in March. Additionally, perhaps the biggest negative shift this month was for future outlook with that index falling 4 points.  By comparison, the index for present sales only fell by 2 points. In other words, homebuilders seem to have experienced some slowdown in activity and are anticipating for it to get worse. 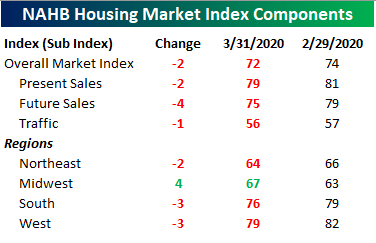 Again the index for the Midwest in March was a bit of an outlier.  It was the only region to rise in March, but that is after it was a bit weaker than other regions recently. In fact, the rise to 67 also still leaves the index for the Midwest 6 points off of the December high of 73.  Overall, as with the headline index, across different regions, sentiment has shifted lower although this is likely just the tip of the iceberg. 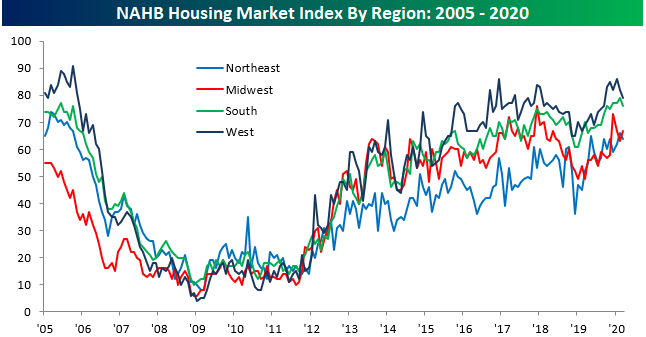 One factor at play that that may be balancing itself out is mortgage rates. The national average for a 30 year fixed rate mortgage was sitting at the low end of the past few years’ range earlier this month.  In the past week, though, mortgage rates have moved sharply higher and are now at similar levels to where they were last year. In other words, while low rates may have temporarily bolstered homebuilder confidence earlier this month, given the move in the past week, those effects have likely eased. Turning to next month’s survey, there is likely to be a large downward shift lower in homebuilder sentiment, especially if rates continue to drift higher. Start a two-week free trial to Bespoke Institutional to access our interactive economic indicators monitor and much more. 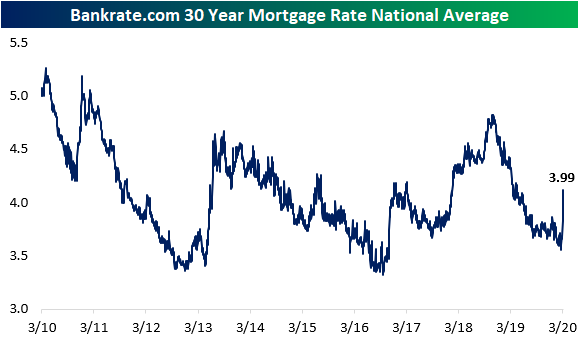