The housing sector remains on fire and as such, homebuilder sentiment remains historically elevated. After falling for the past two months, the NAHB’s Housing Market Index experienced a small bounce in February. The index rose from 83 to 84 compared to expectations of no change.  At 84, it is still 6 points below the November record high of 90, but that is also above any other reading in the history of the data prior to October.

The improvement in the headline number this month was driven entirely by higher traffic. That index was up 4 points month over month and now sits 5 points below November’s record high of 77.  Meanwhile, of the other components, Present Sales went unchanged at 90 while optimism for the future was dented with that index dropping to a six-month low of 80.  Again, although those readings have not improved, they remain historically strong. 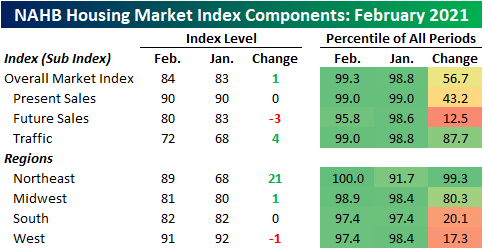 As with the different categories of the report, the readings across the various regions’ indices were mixed.  The West was the only region where homebuilder sentiment declined. Granted, that drop was only 1 point and at 91, the index still ties the pre-pandemic record high. Meanwhile, the South went unchanged and the Midwest experienced a small rebound.

One of the more notable changes of the whole report was sentiment in the Northeast. Even though it too has been at some of the strongest levels on record, over the past few months the region’s reading on homebuilder sentiment has been a significant laggard compared to the rest of the nation.  From its high of 87 in October, the index for the Northeast fell 19 points through January.  For comparison, in that same span, the Midwest index fell only 4 points while the South and West were up 1 and 3 points, respectively.  In February, though, whereas other regions remain several points off their highs, the Northeast put in a new record high after lurching 21 points higher.  The only times that this index has risen by more in a single month was in June (31 points) and July (22 points) of last year.

As for other housing data released this morning, the MBA’s weekly reading on mortgage purchase applications has continued to fall. Since the peak in mid-January, mortgage purchase applications have fallen nearly 14%, and the index now sits at the lowest level since the first week of November.  Granted, that is still well above pre-pandemic levels, so it’s hardly a weak reading. 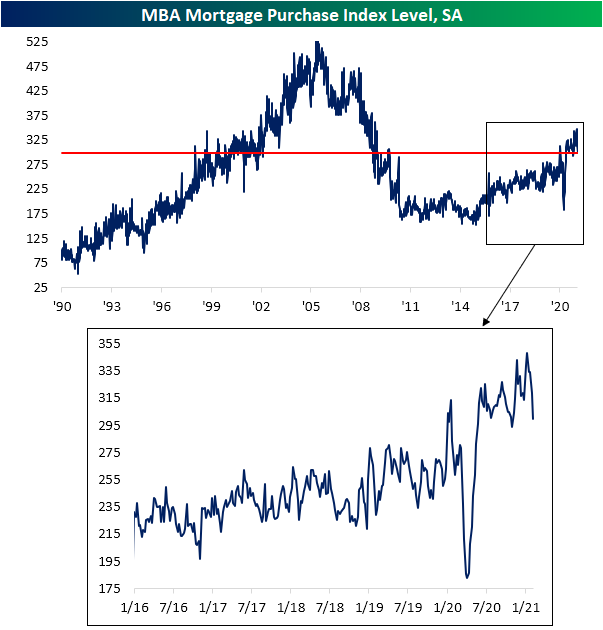 Higher mortgage rates likely in part played a role in that lower reading in mortgage applications. As shown below, with a broader rise in rates recently, the national average for a 30 year fixed rate mortgage has gone from a low of 2.82% just over a week ago to 2.94% yesterday; tied with January 12th for the highest rate since the end of November. That has also been the biggest one-week rise in the average mortgage rate since August. 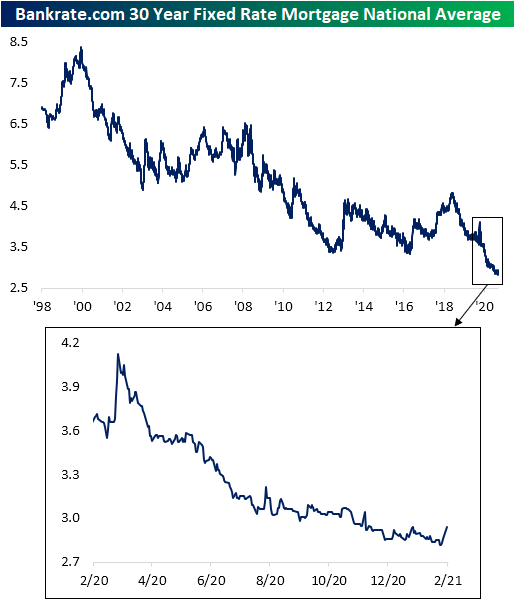 Like the macro data released today, homebuilder stocks are in turn off their highs.  After reaching extreme overbought levels last week at the top of its uptrend channel that has been in place over the past few months, the S&P Homebuilders ETF (XHB) has been mean-reverting over the past couple of days.  With the downward move, the 50-DMA will be a support area to watch as it consistently has been since the summer. Start a two-week free trial to Bespoke Institutional to access our interactive economic indicators monitor and much more. 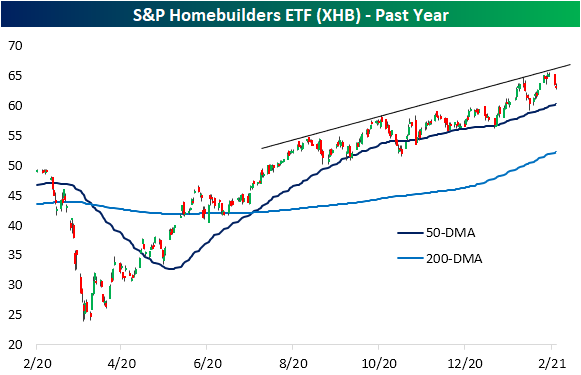