Earlier today we updated our weekly Stock Scores, which ranks each of the stocks in the S&P 1500 based on various fundamental, technical, and sentiment factors.  Coincidentally on the same day that the Federal Reserve surprised with a 50 bps rate cut, one group of stocks poised to benefit from lower rates, the homebuilders, came in with very strong scores.  As shown in the chart below, breaking down the S&P 1500 by the GICS Level 4 Sub-Industries, the average stock in the homebuilder sub-industry had a score of 65.9 (out of 100). That is higher than any other group with the next highest-ranked sub-industry being Heavy Electrical Equipment.  Another interesting group to note is Airlines, which despite having been crushed in the coronavirus fallout, surprisingly find themselves in the top ten.

The strength in Airlines is due in large part to high fundamental ratings for stocks in the group.  Those high scores don’t fully take into account the weaker earnings that the market is pricing in, but unlike prior periods over time, airlines as a whole are in a lot better financial shape than they were in the past. 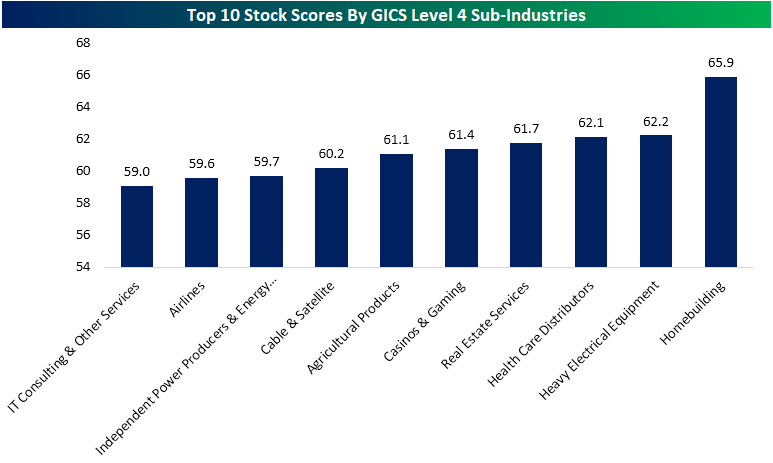 Looking at just the homebuilder stocks, Taylor Morrison Home (TMHC) boasts the highest total score this week at 81.1 thanks to strong fundamental, technical, and sentiment scores. TMHC has such a strong score this week that it also places second out of all S&P 1500 stocks. Several others have similarly strong fundamental scores, but only DR Horton (DHI) has a flawless technical score. 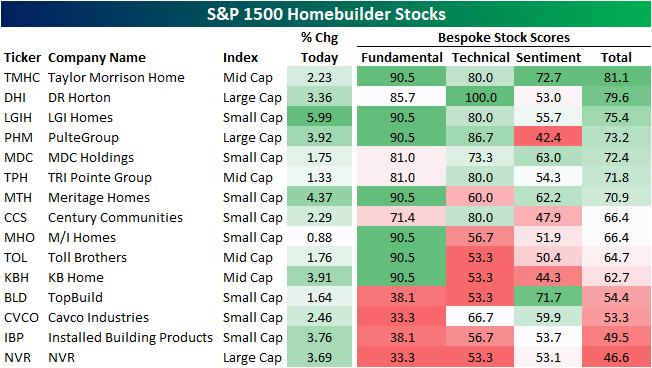 While equities more generally have traded violently in the last two weeks, they have moved decidedly lower this afternoon, even after the FOMC cut rates. The homebuilders, however, have been the exception . Following steep declines last week, the Homebuilders ETF (ITB) fell back down to the 200-DMA for the first time in nearly a year.  That level acted as support, though, as ITB bounced off that level over the past couple of sessions. This bounce has been helped further today by low rates providing a stimulus to the industry.  This is as already low mortgage rates have led to housing being a bright spot for the economy. Looking ahead, the next resistance to watch for ITB would be the 50-DMA. If you’d like full access to our weekly Stock Scores ratings, start a two-week free trial to Bespoke Institutional today. 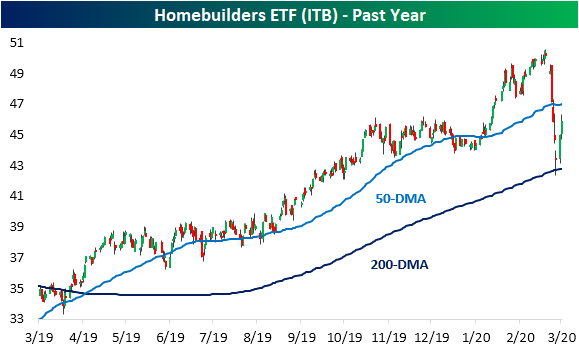