In every month from August through November, NAHB’s reading on homebuilder sentiment came in at record highs. That streak was bound to come to an end eventually, and it happened this month. The December reading released today was expected to decline from a record of 90 down to 88. Instead, the drop was even larger as the index fell to 86.  Although lower, that is still the second-highest reading on record dating back to 1985.

Each of the sub-indices were also lower this month with the declines in the bottom decile of all monthly moves, though again, the indices remain at historically strong levels in the top 1% of all readings.  For the sub-index that tracks present sales, just like the headline number, the four-point decline in December hasn’t done much damage as it was also still the second-highest reading on record.  The indices for future sales and traffic likewise fell an identical four points.  For future sales, the decline only brings it back to where it stood in September and the index for Traffic is at the lowest level since August. Those are the third and fourth highest readings on record, respectively. 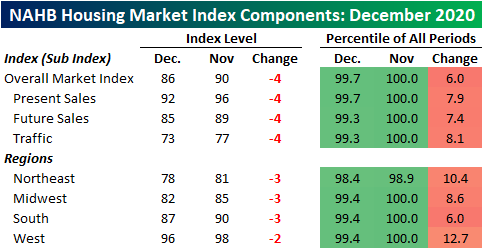 The picture also remains strong based on regions in spite of broad declines.  While every region experienced a decline, the West’s was the smallest. Additionally, the index for the West is the highest of the four regions.  The Northeast, on the other hand, has the lowest reading for sentiment, though, it too is in the top 2% of all readings. 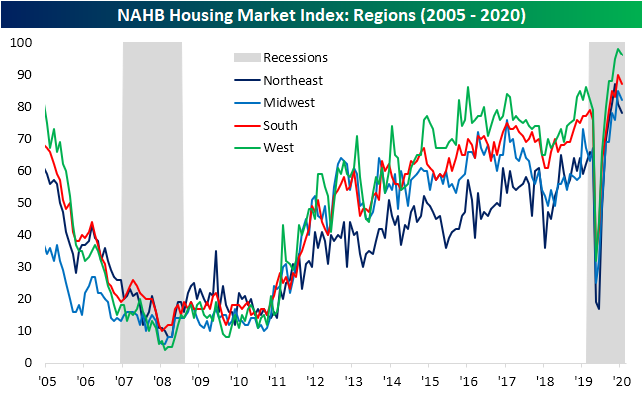 Elsewhere in housing data today, the MBA’s weekly mortgage application data showed another uptick in purchase applications.  Purchase apps rose 1.8% week over week, and while still off the highs from the last week of November, purchases are running at the strongest level in over a decade. 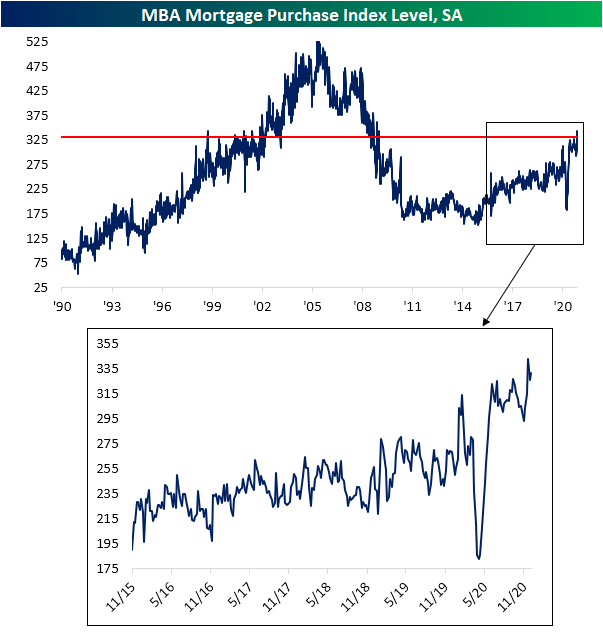 Even though this data remains broadly strong, homebuilder stocks have not been reflecting it.  As shown below, the S&P 1500 Homebuilders group has yet to take out its October 15th high, currently trading 11.51% below that level.  Since that high, the index has also fallen below its 50-DMA with multiple failed attempts to move back above. In fact, of the 43 trading days since that high, the group has closed below its 50-DMA on all but 10 days. While that paints a somewhat negative technical picture, on the bright side, the group has yet to make a lower low. Click here to view Bespoke’s premium membership options for our best research available.