Homebuilder sentiment came in significantly better than expected in October rising from 68 up to 71 compared to expectations for the index to remain unchanged at 68.  With October’s gain, overall sentiment is currently at its best level since February 2018.  Also notable is the fact that over the last ten months, the NAHB Homebuilder Sentiment index is up 15 points.  That’s the strongest ten-month rate of change in more than six years.   With homebuilder sentiment so strong, it’s hard to imagine that the economy is on the cusp of a downturn.

Looking at the internals of the report, strength was broad-based at a national level as Present and Future Sales as well as Traffic all saw impressive gains.  On a regional level, though, it was a bit of a mixed picture.  While sentiment in the South and West increased, sentiment in the Northeast and Midwest declined.  In the case of the South, though, sentiment hit its highest level since June 2005 (chart below)! Start a two-week free trial to Bespoke Premium to sample our actionable research.  If you use this checkout link, you’ll receive a 10% discount on an annual membership if you stick with it past your trial period. 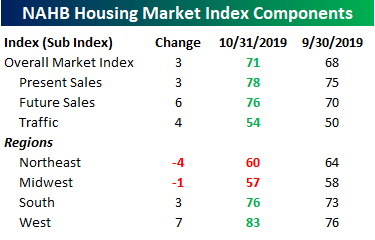 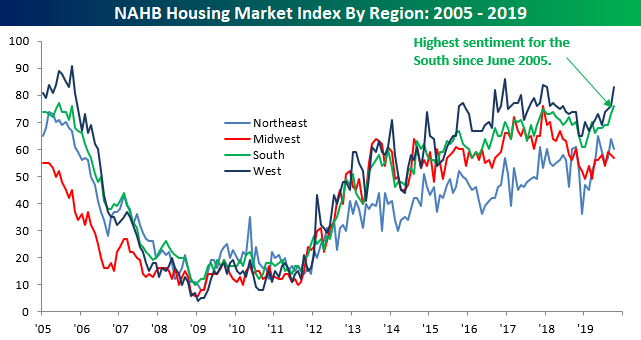