Homebuilder sentiment peaked back in November with the NAHB’s Housing Market index topping out at 90.  In the time since then, it has reversed lower by 10 points to 80 this month with higher prices and various shortages being the main reason reported by the NAHB for the decline.  The drop leaves the index at the lowest level since last August, although it’s still above any pre-pandemic reading.  In short, homebuilders remain historically optimistic but not to the same extent that they were in late 2020. 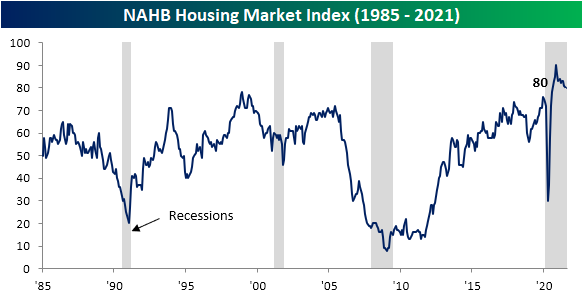 Playing into that decline in the headline number was a single point drop in Present Sales and a much larger six point decline in Traffic.  The Present Sales index, which has the highest weighting on the headline number at nearly 60%, fell to 86 which ties the pre-pandemic record high from December 1998. The Traffic Index holds the second-largest weight at roughly 27%, and its larger decline was the main driver of the overall drop in sentiment.  This month’s decline was particularly large ranking in the 3rd percentile of all monthly moves.  Although traffic has moved sharply lower, it too remains healthier than any period prior to the pandemic.  One other silver lining is that Future Sales rose 2 points to move back above 80.  While that is far from setting any sort of new high as the index still needs to climb another eight points to reach its record, it does point to some improvement in homebuilder outlook. 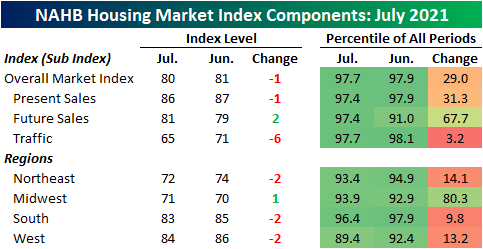 Looking across each of the four regions broken up by the report, only the Midwest saw an overall improvement in July whereas each of the others fell by 2 points. Once again, those drops still leave the indices at historically solid levels. 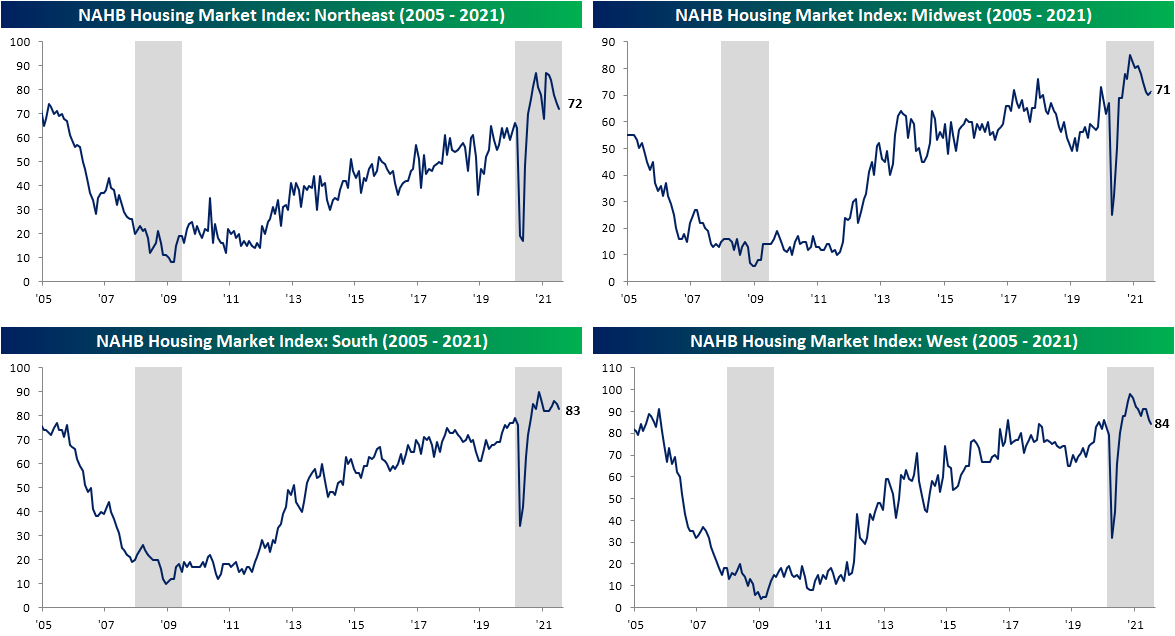 Even though the NAHB’s reading on homebuilder sentiment headed lower once again this month and there is a broader weakness across equities today, the S&P Homebuilders (XHB) has managed to so far hold up at support.  As shown below, XHB tested support at the June low near $69 on the initial drop at this morning’s lows. That will continue to be a level to watch going forward, although it is also in a bit of a no man’s land. XHB currently finds itself smack dab between its 50 and 200-DMAs. 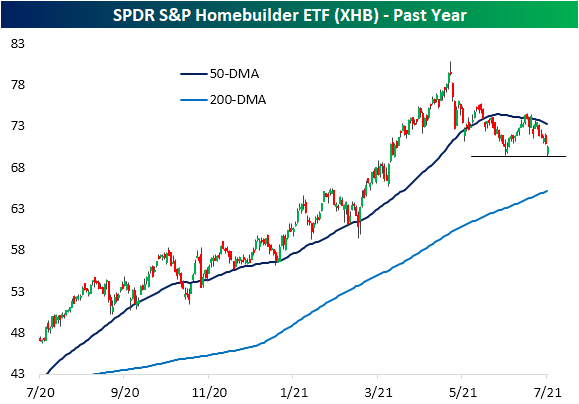 As for any catalysts to change that, hard data on housing starts will be released tomorrow and earnings are certainly another.  As shown in the snapshot of our Earnings Explorer tool below, there are a handful of XHB stocks scheduled to report over the next week, and many others are also scheduled over the next few weeks. For the most part, these stocks have averaged positive reactions to earnings with D.R. Horton (DHI) averaging the strongest stock price reaction of any of those reporting this week.  Click here to view Bespoke’s premium membership options.