Homebuilder sentiment declined in January, but the drop came on the heels of a much stronger than expected December where overall confidence surged to the highest level in over 20 years.  While economists were expecting the headline index to fall from 76 down to 74, the actual decline was just one point to 75. Even with this month’s decline, though, overall homebuilder sentiment is higher than all but four other months in the history of the index.  With a strong economy and low-interest rates, how can you fault homebuilders for being positive?

Breaking out sentiment by sales trends and regions was a mixed picture. While Present Sales dipped, Traffic was actually higher which would seem to confirm reports that the Spring selling season is starting off early this year. On a regional basis, sentiment in the Midwest dropped sharply in January, but keep in mind that followed a monster surge in December.  In fact, this month’s seven-point decline in sentiment for the region erased less than half of last month’s increase.  Outside of the Midwest, sentiment in the South was unchanged (right near highs for the cycle), while the Northeast and West (also at cycle highs) both saw improved sentiment. Start a two-week free trial to Bespoke Institutional for complete access to all of our economic analysis. 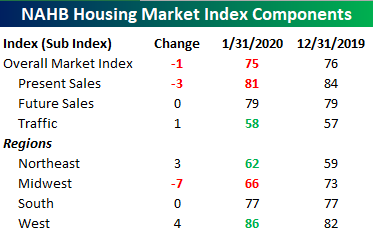 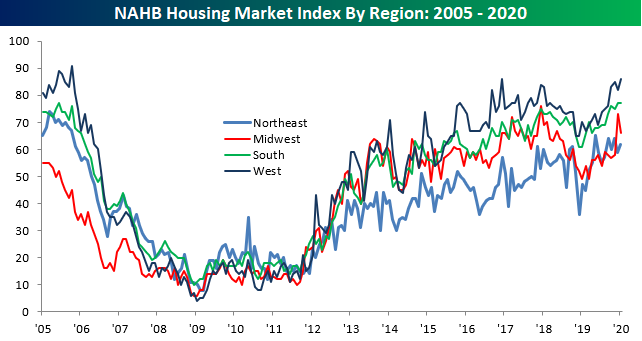