Today’s release of homebuilder sentiment for the month of May from the NAHB helped to confirm that housing data continues to hold up better than other areas of macroeconomic data.  Like most other economic data of late, NAHB’s Housing Market Index has collapsed over the past few months and is sitting around some of its lowest levels in years.  But unlike other data, it never reached any sort of new drastic low and there was even a significant improvement in May as the index rose from 30 in April to 37.  That 7 point month over month increase was the largest monthly increase for the index since another 7 point gain in June of 2013.  Outside of that 2013 occurrence and a few other 7 point increases in 2001, 1991, and 1986, there have only been six other months in the history of the survey that have seen the headline index increases by more.

After experiencing record declines across the board in April, as shown in the table below, breadth was pretty strong this month with the only sub-index to fall further being that for the Northeast.  Of the sub-indices, expectations for sales for the next six months saw the biggest pickup in May rising 10 points. That is tied with four other months (March of 1991, December 2001, November 1987, and July of 2012) for the second largest monthly increase on record. Traffic also improved significantly rising 8 points.  For that sub-index, that was the fourth largest month over month increase on record.  Meanwhile present sales also rose, albeit by a lesser degree. In other words, homebuilders appear more optimistic for the future than the current situation. 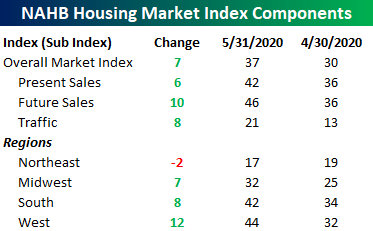 Looking across the regions, after each one experienced their largest drop ever last month, the Northeast, which remains one of the hardest hit areas of the country by the coronavirus, was the only one to see sentiment fall even further in May.  Sentiment in the region is now down to its lowest level since December of 2011 after falling another 2 points.  Meanwhile in every other region, sentiment saw significant improvement with the month over month changes for the Midwest, South, and West all being in the 90th percentile or better of all monthly increases.  Start a two-week free trial to Bespoke Institutional to access our interactive economic indicators monitor and much more. 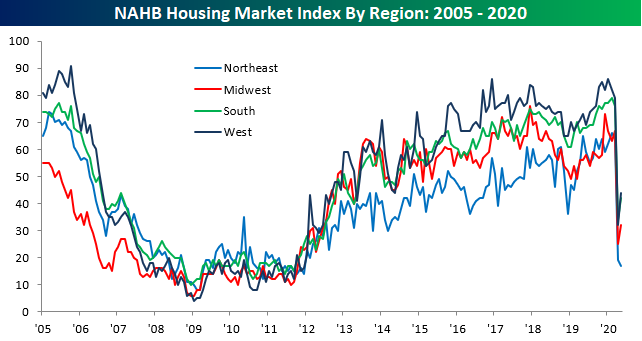