The national average on a 30 year fixed rate mortgage currently sits around 3.06%, little changed over the past month.  Homebuilder sentiment as measured by the NAHB Housing Market Index similarly went unchanged in May staying at 83. Although it has been six months since the record high of 90 without much of a push back up to those record levels, homebuilder sentiment continues to come in well above anything observed prior to the pandemic. Commentary from the NAHB noted that the strong reading on homebuilder confidence is thanks to the low housing inventories, low rates, and strong demand, despite the headwinds of rising costs. While that could have played into the small decline in traffic, future sales did tick higher. 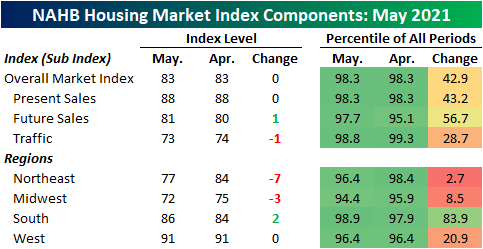 Whereas the headline number was flat on the month, readings based on each region saw much more variety.  By far the largest move was for the Northeast.  Since running back up to the record high back in February, homebuilder sentiment in the Northeast has fallen for three straight months and is now at the lowest level since January.  The decline in sentiment in the Northeast is relatively recent. Whereas the region tied its record high earlier this year, the other regions all peaked out in the fall. For the Midwest, the declines have kept coming with 3 point declines in each of the past three months alone.  The West and South, on the other hand, have found some respite.  The South has ticked higher by 2 points in back-to-back months as it reached the highest level since December.  Meanwhile, the West was unchanged at 91 in May.

As for homebuilder stocks, the iShares US Home Construction ETF (ITB) had been trading in overbought territory throughout most of the spring but in the past couple of weeks, it has come back down to Earth. Last Wednesday, ITB successfully tested its 50-DMA with a small bounce at the tail end of the week.  So far today, it has turned lower alongside the broader market with a 1.35% decline. While that means Friday’s close marks a lower high, for the time being, the uptrend is still intact. Click here to view Bespoke’s premium membership options for our best research available. 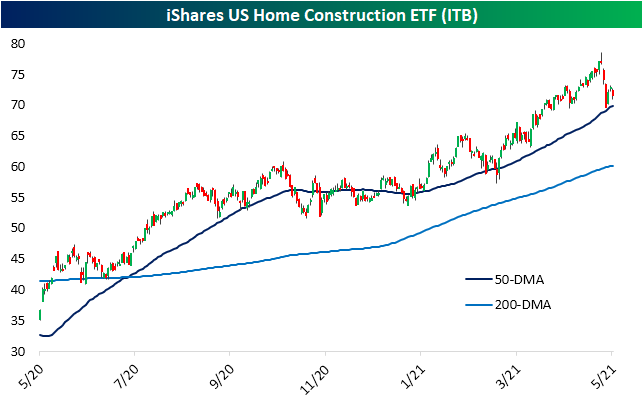