This morning, the NAHB updated their monthly reading on homebuilder sentiment, and like most other recent economic data, the results were not good.  Homebuilder sentiment fell below 50 for the first time since June of 2014 (readings below 50 are considered contractionary).  The index plummeted to its lowest reading since June of 2012 falling from 72 in March down to 30 in April.

As shown in the table below, that 42 point decline in just one month was the largest ever recorded in the data going back to 1985.  The same can also be said for every one of the sub-indices as well which are now at multi-year lows.  That stands in stark contrast to where things were just one month ago.  In March, the headline index, as well as several other sub-indices, were in the 95th percentile or better of all readings.  In other words, before the COVID-19 pandemic homebuilders’ outlook was historically optimistic.

One interesting thing to note in this month’s survey was the declines in homebuilder sentiment were broad across geographic regions but the areas of the country most affected by the virus saw larger declines and are now at lower levels.  Namely, sentiment in the Northeast is the lowest of the four regions at 19 compared to the next lowest, 25, in the Midwest.  That is as the bulk of US COVID-19 cases can be found in the Northeast, particularly in the tri-state area. Start a two-week free trial to Bespoke Institutional to access our interactive economic indicators monitor and much more. 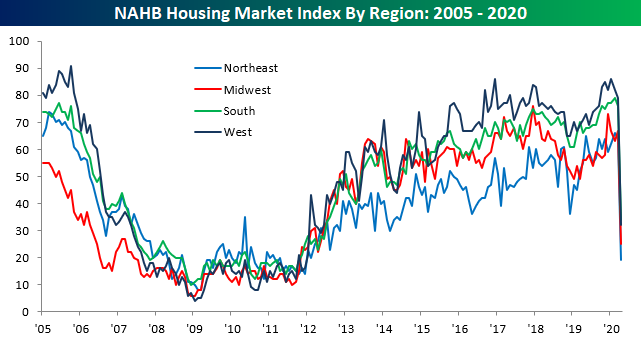