It’s the unofficial end of summer with Labor Day now here. While that may mean summer vacation for many traders is over, historically, the holiday-shortened week has averaged uninspired performance.  Over the course of the entire week (from the close of the Friday before the holiday to the close of the following Friday), the S&P 500 averaged a modest decline of 0.13% with positive performance only half the time during the post-WWII period.  However, breaking down the years by whether or not the S&P 500 was higher or lower on a year to date basis shows a more nuanced story.

Years in which the index was up year to date heading into the holiday have tended to see modest further gains that week.  Tuesday has typically been the best day of the week with a 15 bps move higher.  On the other hand, years when the S&P 500 was lower YTD have been far worse.  The Tuesday after Labor Day has nearly averaged a full 1% decline with positive performance just 40% of the time.  That average is somewhat skewed by a 9.9% drop the lady after Labor Day in 1946, but even still, the median decline has been 0.50%.  Thursday and Friday have similarly averaged declines albeit much smaller in size. 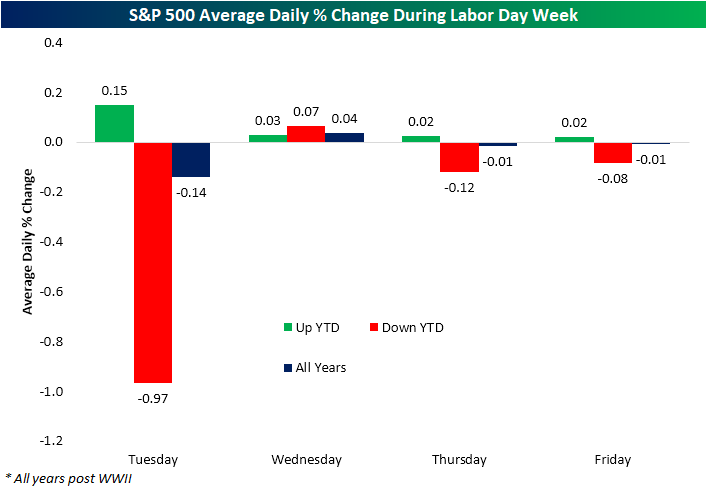 Looking at the intraday pattern going back to the start of our data in 1983, the bulk of the decline came from midweek on.  As shown in the intraday composite below, the S&P 500 has on average almost turned positive by Wednesday’s close, but on Thursday and Friday it has tended to face heavy selling pressures. The series for the years when the S&P 500 was down YTD looks a lot more extreme than the one for years when it was up YTD, but that’s because of the relatively small sample size (just eight years since 1983). In those eight years, though, the S&P 500 was only up the day after Labor Day twice (1990 and 2015). Buckle up!  Click here to learn more about Bespoke’s premium stock market research service. 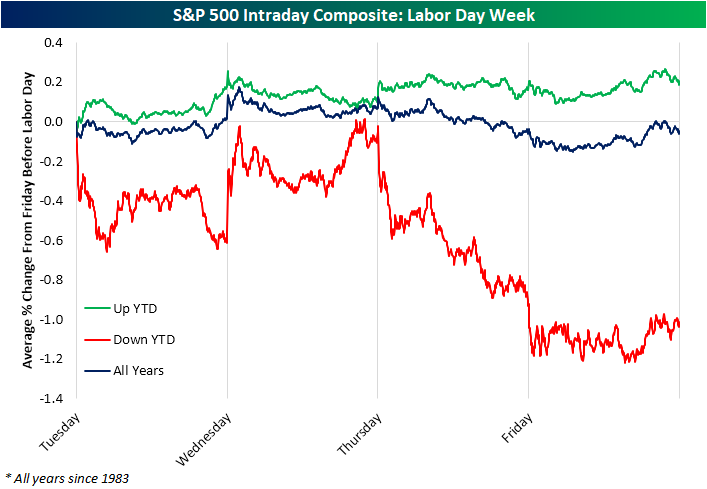