“Hodl” Off For Now

Unless we’re talking about long-term US treasuries which were modestly lower in Q2, just about every other asset class was higher.  Among those, bitcoin was no exception. During Q2 alone, bitcoin was up slightly more than 40%, which is impressive even for a volatile asset class like cryptocurrencies.  While bitcoin’s performance was very strong, though, closing out the quarter, there was a feeling of disappointment that it didn’t finish off the quarter even stronger.

Two things left bitcoin ‘hodlers’ looking for more.  First, while the price briefly eclipsed $10,000 during the quarter, it wasn’t quite enough to take out the highs from February.  Second, from a longer-term perspective, the intraday high of ~$10,400 on June 4th coincided nearly perfectly with bitcoin’s downtrend line from its record high back in late 2017 when crypto was all the rage.  Until bitcoin can take out either its downtrend or make new highs for the year, investors may be best served to wait on the sidelines. Click here to view Bespoke’s premium membership options for our best research available. 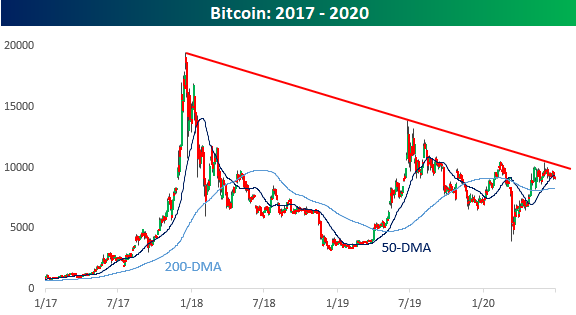