It’s no secret that growth stocks have underperformed value stocks over the last twelve months. The trailing-twelve-month performance spread (percentage points) between the small-cap growth and large-cap value indices, two opposite ends of the equity market, is currently at -20.5 percentage points. Although this is far above the recent low of -33.9 ppts, the current reading is in the bottom 6% of all days since the mid-1994 (when both the MSCI USA Small Cap Growth and MSCI USA Large Cap Value Index were active). Interestingly, this year’s trailing twelve-month performance spread was the lowest since 2001 (unwind of the dot-com bubble). Funny enough, the spread had hit the highest level since early 2000 in 2021, as excessive performance from small-cap growth stocks has tended to reverse course after reaching extreme levels. 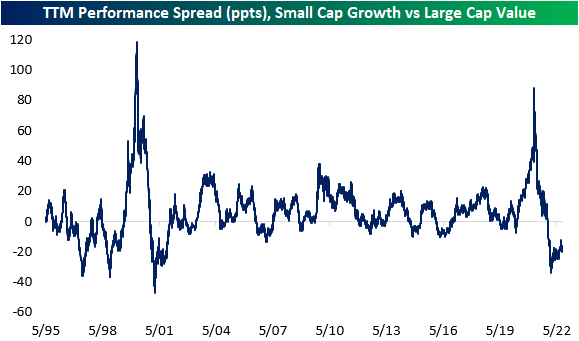 Small-cap growth stocks tend to trade at significantly higher valuation multiples than large-cap value stocks, which is part of the reason that small-cap growth equities have sold off at a higher rate than their counterparts. These stocks also have higher betas, so market moves have a disproportionate effect. These factors have caused the average daily percent change spread between the two indices to reach an extremely elevated level, the highest since 2000 – 2001. This measure of volatility is also yet to roll over, indicating no end to the volatility regime that has been in place. Click here to learn more about Bespoke’s premium stock market research service. 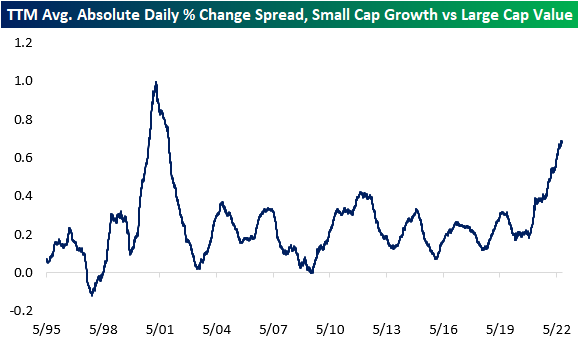