The National Federation of Small Businesses (NFIB) released its Small Business Optimism Index for December early this morning.  The report showed optimism has begun to fade after a modest rebound in the past few months.  The index fell back below 90.0 to the lowest level since the June of 89.5. 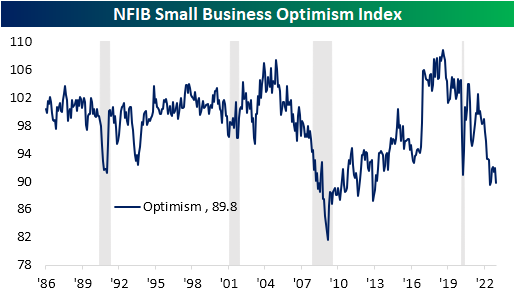 The 2.1-point drop in the index was also the largest m/m decline since June ranking in the bottom 12% of all m/m moves on record.  Given that lower reading, the December print is also now back below the spring 2020 lows putting it in the bottom decile of its historical range.  Breadth within the report was abysmal with only one input to the headline index (current inventory) moving higher m/m while plans to increase inventories was the only input unchanged.  The rest of the categories experienced significant declines, some of which rank in the bottom few percentiles of all monthly moves. 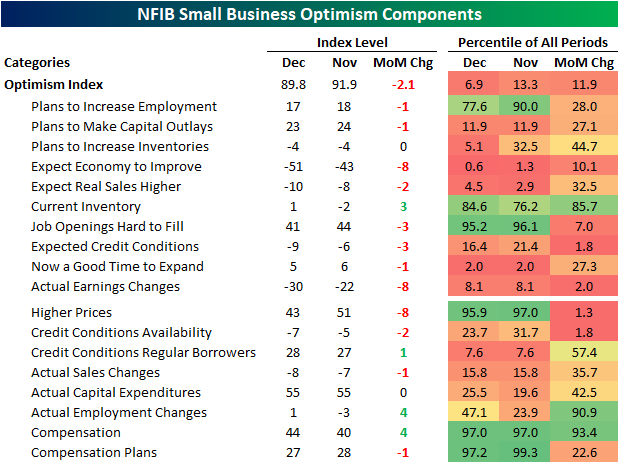 As we noted in today’s Morning Lineup, employment metrics were not a bright spot.  Overall, labor market conditions continue to roll over.  Hiring plans hit the lowest level since January 2021, and the percentage reporting job openings are hard to fill likewise dropped to the lowest levels since the start of 2021.  On the bright side, compensation recovered from the November decline while firms also reported adding workers on a net basis. 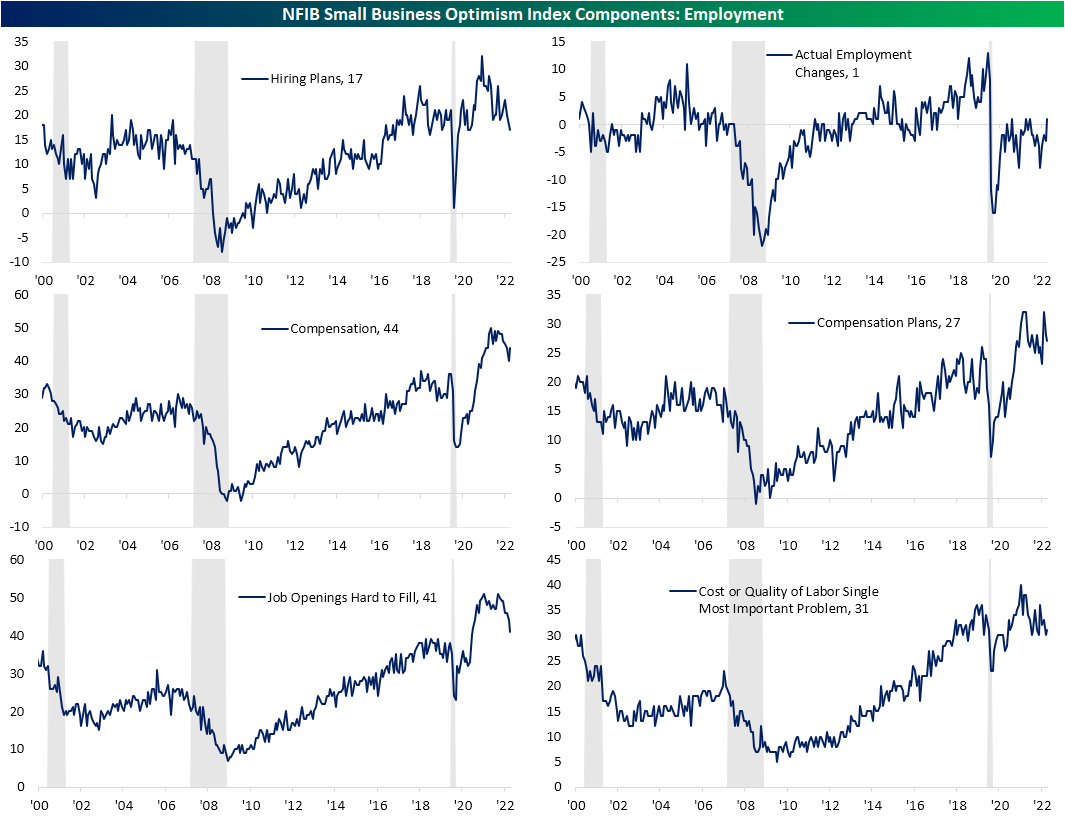 The economic outlook remains historically depressed with that index falling 8 points to -51.  Although that still has 10 points further to fall to reach the June low, this index continues to hover well outside of historical norms.  Given the lack of optimism, a net of only 5% of businesses report now as a good time to expand.  Additionally, a higher percentage of businesses are also reporting weaker sales and expectations for weaker sales while observed earnings also continue to worsen in spite of the rollover in prices. 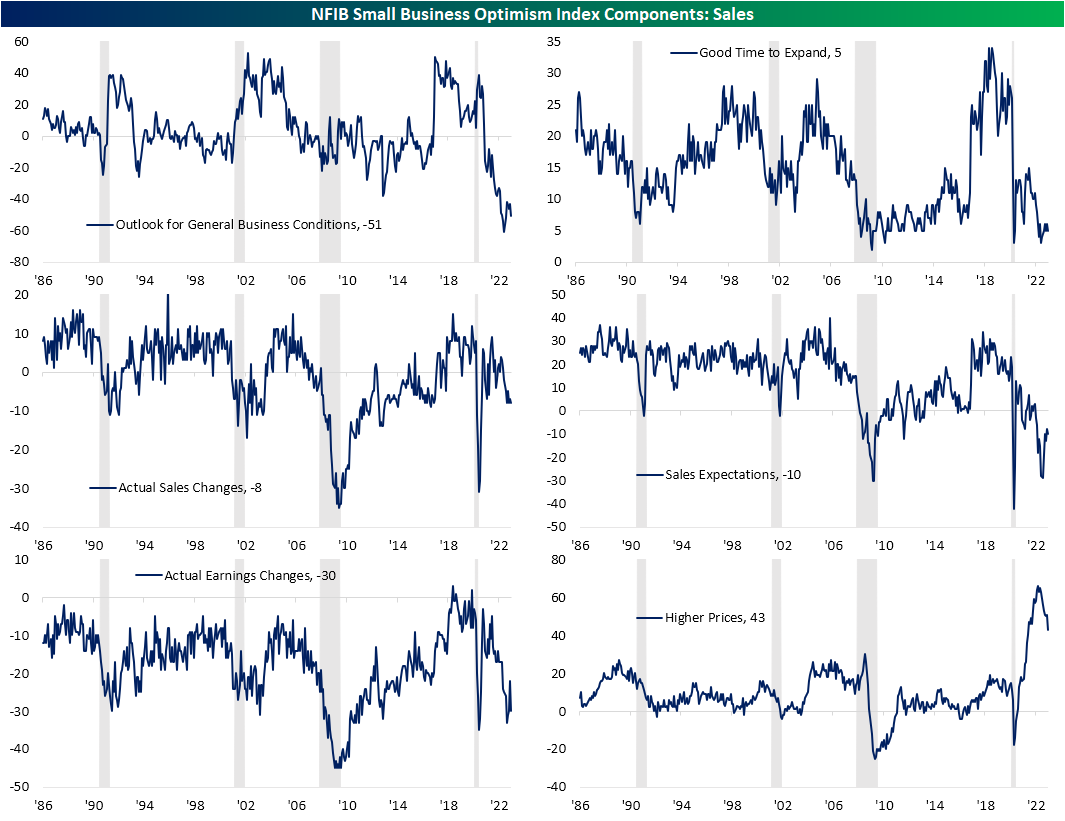 As for a breakdown of the reasons small businesses are reporting now as a good time/not a good time to expand, economic conditions are the main reason given for pessimism.  Of those responding now is not a good time to expand, 42% blamed economic conditions while the second highest share (9%) blamed the political climate. The joint next most common reason blamed for pessimism was interest rates and the cost of expansion. For the former, that is the highest reading since at least the start of the pandemic while the latter is the highest reading since July 2021. That high reading in cost of expansion is somewhat surprising given the drop in the higher prices index, however, that could suggest that costs of financing are lumped in with the “cost of expansion” category. 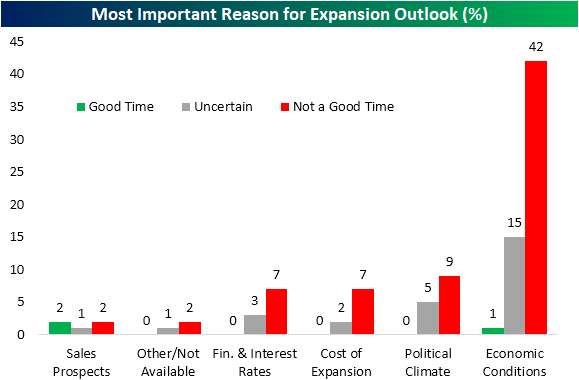 We would also note that the stress of higher rates is also beginning to show up elsewhere in the report.  While capital expenditure plans and actual changes to capital expenditures have not seen any major shifts, expected credit conditions fell to the lowest level in nearly a decade. Meanwhile, the availability of loans reached the worst level since September 2014. Click here to learn more about Bespoke’s premium stock market research service. 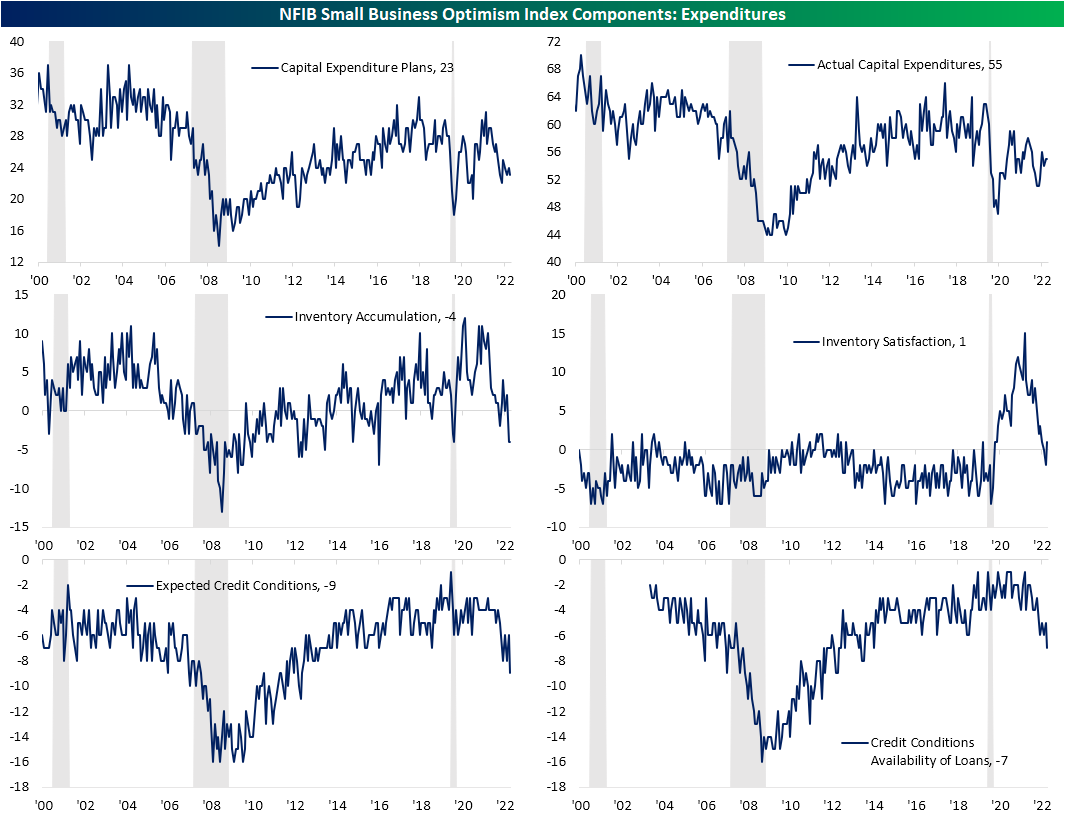