Higher Claims on the Horizon?

Unfortunately for equities, between a stronger-than-expected ADP payrolls number and stronger-than-expected jobless claims data, today’s data showed some strength in the US labor market.  Honing in on the weekly claims print, initial claims dropped all the way down to 204K this week. That marked a 19K decline from last week’s 2K downwardly revised level of 223K and brings claims to the lowest level since the last week of September when we last saw a sub-200K print. Expectations were calling for the reading to go unchanged from the unrevised level of 225K from last week. 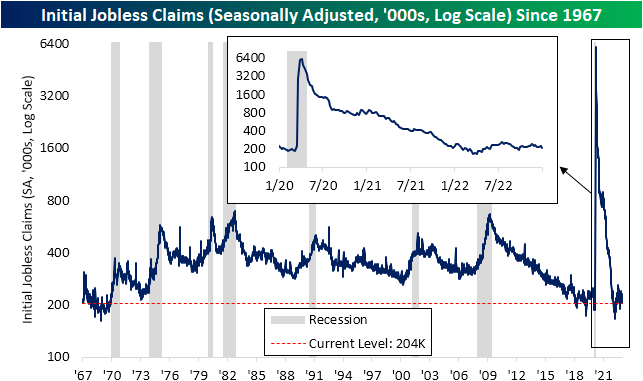 Even continuing claims improved falling to 1.694 million instead of the forecasted increase to 1.728 million. Last week’s reading of 1.71 million had been the highest since February 2022 as continuing claims have steadily risen (at a pace consistent with past recessions) in the past several months. 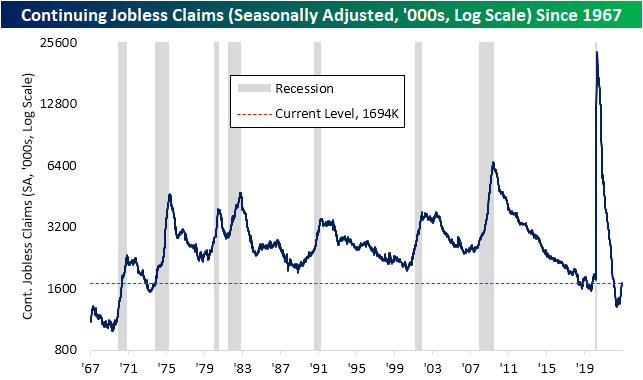 Although both initial and continuing claims had strong showings, there is the caveat that the current period was smack dab in the middle of the holidays. For starters, that could have some impact on the weekly seasonal adjustment, but more importantly, we would note that those are some of the weeks of the year most prone to revisions.

In the chart below, we show the median revision (expressed as an absolute percent change from the first release) for each week of the year since 1997.  The final week of the year has typically experienced a revision of +/-3.8%, tying the week of the July 4th holiday for the largest revision of the year. That means that while claims did show improvement this week, it might not be worth reading too deep into that single number. Further data will be beneficial to help confirm this print (via revisions or lack thereof) as well as provide a clearer picture of the trend, which had been one of deterioration leading into the end of the year. 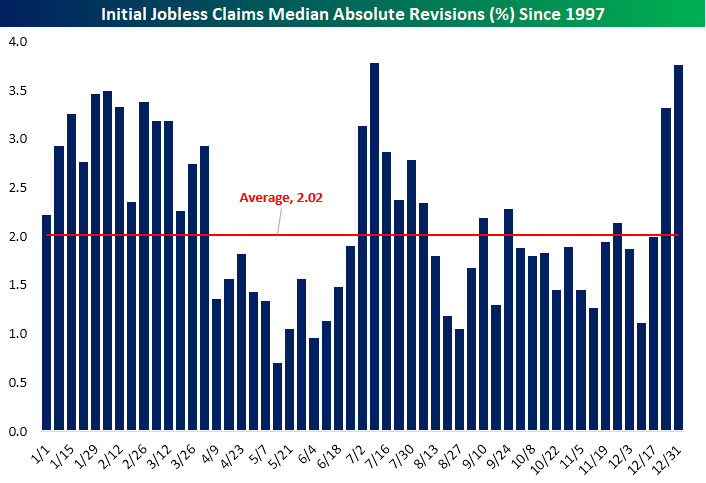 One other slightly more anecdotal factor worth noting on the stronger-than-expected jobless claims data is that the strong reading this week has gone contrary to the number of layoffs that have made their way into headlines lately.  Although the company initially announced the layoffs back in November, Amazon (AMZN) announced today that it plans to lay off a higher number of employees than previously stated (18K versus 10K originally). That also follows an announcement of a significant reduction of roughly 10% of the workforce of Salesforce (CRM) yesterday.

Over the past few months, news story mentions (in data aggregated from Bloomberg) of things like job cuts, firings, and layoffs have surged reaching a high of 16.5K on a four-week rolling average basis in November (around the time of Amazon’s initial announcement).  Although that reading has pulled back in the several weeks since then, news counts on the topic remained elevated through the end of 2022 and are likely to get a further bump with this week’s headlines. Over the past decade, these story counts have generally followed the path of both initial and continuing claims.  More recently, however, there has been somewhat of a divergence with story counts far outpacing actual claims figures.

That divergence could be for an array of reasons such as workers are quickly finding other roles and not needing to apply for unemployment insurance, but another thing to consider is the timing of the announcement of layoffs versus when they actually happen. For example, in the case of Amazon, while the initial announcement was all the way back in November, those cuts were not planned to go into effect until mid-January. In other words, while not in the data now, higher claims may very well be on the horizon. Click here to learn more about Bespoke’s premium stock market research service. 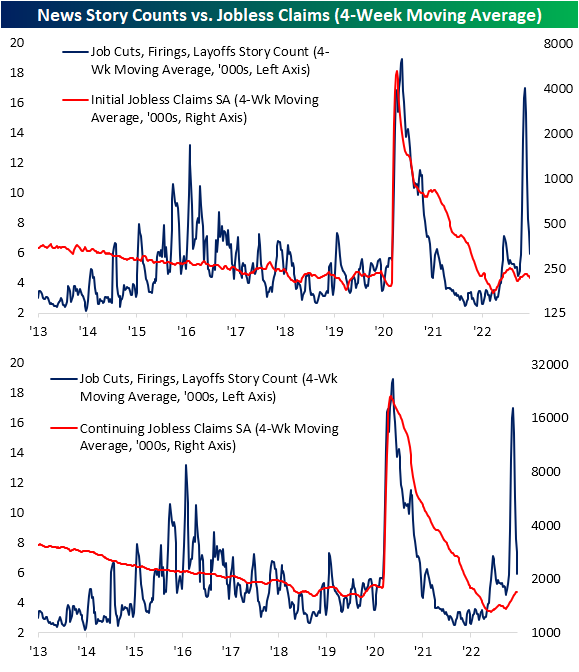